Laurie Kelley June 29, 2015
“After nourishment, shelter and companionship, stories are the thing we need most in the world.”
― Philip Pullman
As a writer, I tend to agree! Whether we are imparting facts or weaving a tale, we seem to learn best when we hear it all as a story. Stories are especially important for families dealing with bleeding disorders. We all want to hear the Introduction (Beginning), the Conflict and the Climax (Middle), and the Outcome (End). And we want to hear lots of stories because our own story will mirror one someday.
Grifols, manufacturers of plasma-derived clotting factors, is offering a chance for you to tell your story, to help other families who have hemophilia or von Willebrand Disease.
Visit www.mybleedingdisorder.com to share your experience and provide inspiration and motivation to others seeking ways to better manage their bleeding disorder.
Your story may be featured on the newly launched consumer website , and may also be selected to be shown in the Grifols booth at the National Hemophilia Foundation conference in Dallas, Texas in August!
As I always advise, please read the privacy notice on the site before sharing.
This is a paid public awareness notice from Griflols. 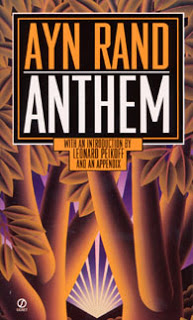 If you want to know what the legendary Ayn Rand, who grew up in Stalinist Russia, believes in a nutshell, read this novella. In this futuristic story, people’s names are replaced by genres and numbers (Liberty 5-3000), humanity has all individuality stripped away, and a collective society emerges. The word “I” is banished, even when referring to oneself. The narrator knows he is different but is not sure how or why. He knows he is not meant to be a street sweeper, as the Elders dictate to him. He has no parents, no family–no one does. His life is controlled by Elders from beginning to the day he dies. He refers to himself as “we,” and is raised to serve the common needs of all. Until one day he discovers an underground place where electricity works–apparently a subway or city from before the end of days. Excited, he shows the Elders but is shunned and shamed. He decides to return to the place, try to make sense of what has happened to mankind and why such technology is being ignored, to improve the lot of the common worker. In the process, he discovers himself, love, his convictions and a future as an individual. A very short read, with powerful and rich ideas about individualism to think about.  Five/five stars.