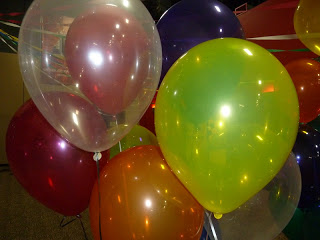 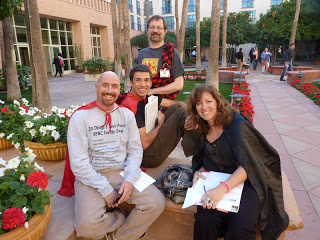 I just spent an exciting two days in Phoenix, Arizona at the National Organization Camping Conference for Hemophilia Organizations, more “tastefully” known as NACCHO. Now in its 10th year, this was nonetheless the first time I’ve been free to attend as a speaker. It’s a great program that teaches best practices and principles of camping for kids with hemophilia, generates a tremendous amount of motivation and allows attendees to interact and learn from one another. (Photo: Cindy Komar, and board planners) 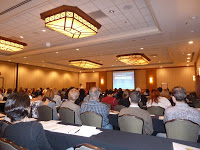 I arrived late due to yet another snowstorm in New England, and it was clear the attendees already were bonded and excited. Led by “Big Dog” Pat Torrey, the theme of the entire meeting seemed to be “Superheroes.” Using this metaphor, camp directors were encouraged to think like a superhero: what skills did they have? How would they help and serve others? Big Dog found creative ways to keep bringing each session to a close around this theme. He encouraged people to get into their role by dressing as superheroes! This led to some hilarious improvising, as most attendees used whatever materials they could find at the event or at the hotel. 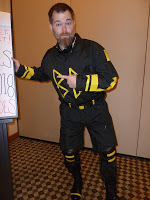 I was very impressed to see camp representatives from Mexico, the Netherlands, the Czech Republic, Romania, England and India! NACCHO invites professional camping organizations to come in and share ideas and techniques applied to camps nationwide, and then find ways to make them applicable to a camp for children with bleeding disorders.

I was invited to speak about Project SHARE (our factor donation program) and Save One Life (our child sponsorship program). How does this relate to camping? Some developing countries have camps—indeed, I help to found a camp in the Dominican Republic, and have helped with camps in Romania. I also helped fund and run a camp in Zimbabwe, sadly their first and so far last one. Often things discussed at NACCHO are not applicable to camps in developing countries. When one speaker insisted that parents demand clean facilities, and showed a photo of a run-down lavatory, I thought, “That looks pretty good to me!” while the audience winced. When safety rates high here, overseas it’s simply a focus on factor being available. Different standards based on different realities.

The things that are the same? All kids want to meet other kids with hemophilia. All kids want to have fun. They need medical staff nearby in case of emergencies. All kids love to pretend, and the idea of a superhero is universal, whether it is a Marvel comics guy in a red suit, or a Norse god.

Most important: you cannot have a camp without factor, and most developing counties have no factor. Camp becomes a way to attract attention for factor donations and funding; it’s also a great concrete way for a nascent hemophilia organization, struggling to find a way, to provide a program and learn how to organize, delegate, and fund raise. Save One Life also dovetails with this program, as many of the kids who come to camp can be interviewed in depth, and can apply for financial aid through Save One Life. Through Save One Life, we’ve been able to have more children attend camps, or vice versa, join our program. Either way, they benefit immensely! 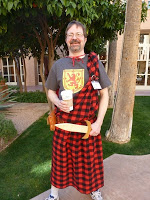 I’m afraid some of my searing images poked a hole in the bubble of elation surrounding the conference, but this is reality for thousands of children. We sometimes forget how lucky we are in America. People were touched more than shocked: following the presentation we raised enough money to sponsor two children! NACCHO planners decided one from India and one from Romania, and hopefully, this would be a perpetual gift that will come from each future NACCHO conference.

(Photo: above, Robert “the Bruce” Graham; Me with the Flash)

The conference celebrated Saturday night at an indoor racetrack where the attendees got to act like kids! Most went in “drag,” in their superhero costumes and there were prizes for best costume, as well as best camping ideas. I dressed as a cowgirl, and as I hung out with Usha, Save One Life’s program liaison from India, I told everyone that I was the cowboy and she the Indian.

If your chapter has a camp and you think you’d like to expand on your activities, programs and vision, NACCHO is the place to come.

Thanks to Bob Graham for the invitation to NACCHO, and to Cindy Komar, executive director of the Hemophilia Association, Arizona, and to Pfizer for providing all the funding for this great event! 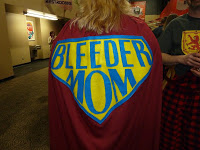 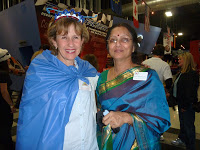 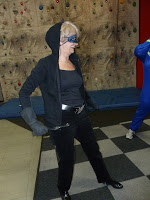 Kissing Kilimanjaro by Daniel Dorr
This easy-to-read book details Dorr’s personal attempt to summit Kilimanjaro. It’s a nice read, done in one evening, as nothing is too technical or even historical. It’s interesting to see Tanzania through Dorr’s eyes, as he is a naïve newcomer: new to Africa and poverty. His girlfriend comes with him on his adventure. Failing the first attempt, he is haunted by his own inability to conquer altitude sickness despite being in good shape, and sets out to try once more. A good book to read for mountaineers or wannabes. Dorr is not a great writer; the text is like reading someone’s blog, casual with easy words and short sentences, but likeable. For those planning to attempt Kilimanjaro—like ME—it’s a good resource. Two stars.