“A Better Place to Be” 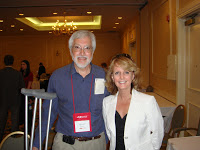 I was lucky enough to be a speaker at the North Carolina Hemophilia Foundation event last weekend, and on my favorite subject–hemophilia in the developing world. This was a jam-packed event with an al star list: Ray Stanhope of the NHF; Mike Rosenthal of the WFH; Carl Weixler of HFA, Richard Atwood, president of NCH. Richard writes a column for my newsletter called “Richard’s Review” and I think is the foremost authority on any book or movie ever released in history that might even mention the word hemophilia! It was great to see everyone at the event. (Photo: With Richard Atwood)

Carl had everyone in stitches by starting his talk with a slide called, “How to Talk Like a Hillbilly” (Carl is from Kentucky). Not to be outdone, I added a slide in before my talk on how to speak like a Bostonian! (“Linder, give the patient a showt of factah.”)

But the best presentation was the “showdown” between famed Dr. Harold Roberts and the ever-delightful Dr. Albert Farrugia of the PPTA, who speaks with a lovely Maltese accent. Both men are brilliant and excellent speakers. Dr. Roberts is decidedly pro-recombinant factor, and Dr. Farrugia strongly makes a case for plasma-derived, and with lots of wit and fun, they sparred about their topics, until Dr. Roberts said good-naturedly, “Why don’t you go back to Australia?” The audience roared with laughter; they were educated and entertained!

Seriously, this is a fascinating topic–plasma-derived vs. recombinant–and one we will explore in PEN in August. Be sure to sign up for a copy! 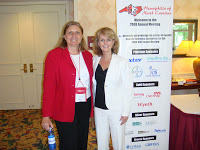 Thanks to Sue Cowell, executive director of NCH, for inviting me to such a great event.

This book reveals the darker side of celebrity, in the story of a 1970s TV star, best known for his role as Hannibal Heyes in the TV series Alias Smith and Jones. The show was a spin off of the 1969 Best Picture nominee Butch Cassidy and the Sundance Kid, starring Paul Newman (who is beloved to the hemophilia community for his Hole in the Wall Gang camps). Duel was a talented rising star, but battled epilepsy and alcoholism, but more than likely something undiagnosed, like manic depression. Like his name, he exhibited a personality described alternatively as sweet and loving, kind and generous, then venomous and raging. He hated the TV show that made him famous, and hated TV in general. He committed suicide at age 31 in December 1971 while in an alcoholic stupor. The book tries to detail his life, but comes across as flat, unsympathetic and groping for answers, which don’t materialize. The book seems more a tribute to Duel with heavy input by Duel’s sister, but it’s depressing overall. Duel simply did not accomplish that much in his young life, compared to others who died young, like James Dean or Jim Morrison. One star. 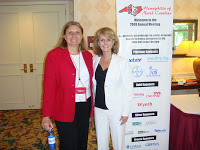 I spent the weekend in North Carolina at the state NHF chapter’s annual meeting. Under mild and southern blue skies, we had a good turn out and a jam-packed agenda. Sue Cowell is the excellent executive director of this dynamic chapter, which claims Richard Atwood as its president. It’s interesting that this is one of the few chapters, maybe the only one, where neither the executive director or president have hemophilia or are related to hemophilia. Richard, hobbling about on crutches after breaking his leg recently during a biking fall, joked with the audience that while he doesn’t have hemophilia, “I bleed.”

Richard also happens to be a columnist for my newsletter, PEN, and I think knows more about US hemophilia history than anyone, as it’s his passion. (Photo: with Sue Cowell)

Ray Stanhope, a long time acquaintance, to represent the NHF and provide an update on activities;

Carl Weixler, past president of Hemophilia Federation of America, to share its programs and activities;

Richard Atwood, who shared the history of hemophilia within North Carolina;

Mike Rosenthal, president of WFH USA, to share programs of the WFH to help those in countries with no access to treatment.

I have to say that Carl is always a delightful speaker and had everyone roaring with laughter when he did an ice breaker: How to Speak Hillbilly. Carl is from Kentucky. We were asked to decipher a conversation on the screen, which we couldn’t of course! The conversation ended with: LIB MR DUCKS. Translated: “‘ell, I’ll be! Them are ducks.” So I had to retaliate and quickly fixed my powerpoint to include an icebreaker with Bostonian-speak: “Linder, give the patient a shawt of factah.”

I was fascinated most by Richard’s presentation about North Carolina, especially about a man who bred dogs, and found that they had a mysterious bleeding disorder. After taking them to Chapel Hill to be diagnosed, and learning they had hemophilia, these dogs became the backbone of scientific research into treatment advances for hemophilia, and gene therapy. North Carolina truly has a vital place in hemophilia history. 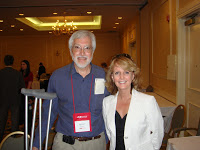 I also spoke at the event, and shared photos and stories of my journeys around the world. We livened things up with a world geography quiz—I even have away money for those with the right answer! The point was to show perspective, which was the theme of the day. Having greater perspective allows greater appreciation. Knowing now the history of North Carolina, you can appreciate its important, and hopefully residents with hemophilia will join the NC chapter’s advocacy efforts at the state house. Greater perspective on how 75% of our community lives worldwide, without treatment, allows greater appreciation of our fortune, even though we may have occasional glitches in treatment. Some of the stories I shared were sad, and the photos heartbreaking. We had a few people cry.

We also had about 5 people approach me to ask to sponsor a child, including the legendary Dr. Harold Roberts, who has also been a keystone in hemophilia treatment innovations. I was very honored just to meet him, let alone accept his kind offer to sponsor a child through my nonprofit Save One Life (www.saveonelife.net/)

It was a wonderful day to mingle with parents, hear their stories, bump into old friends, like Sam Byers and Larry Cline, both of whom I had met about 13 years ago in the same hotel for a similar event!

After the event, I was able to spend the night with my dear friend and colleague Adriana Henderson, who is renowned for her charitable work with the kids with hemophilia in Romania. She held the first World Hemophilia Day in Romania, and the first camp, Camp Ray of Hope, now in its fourth year. I joke that she does not have a son with hemophilia, but does have about 70 boys with hemophilia. Again, she is not related to hemophilia, and it’s to these people we owe so much. 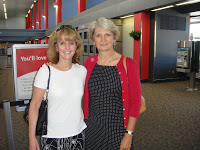 So, if you are reading this, ask yourself: all these people are so deeply involved in helping others with hemophilia and they are not related. What’s holding you back? There are many who need help, advice, financial aid. Get involved at the local, state, national or international level. Your chapter especially needs you as a voice in the state house. Trust me, you will enjoy it, gain greater perspective on life, and do some good in the world!