Laurie Kelley March 14, 2016
The famous Nigerian poet and novelist Ben Okri wrote,
“Stories can conquer fear, you know. They can make the heart bigger.” In this
week’s blog, a young mother shares her personal story about hemophilia, about
overcoming fear, handling her emotions and learning about a therapy that could work
for her family. She shares her story, to help others facing the same fears. We
hope to bring you more such stories throughout the year.

Indications ELOCTATE is an injectable medicine that is used to help
control and prevent bleeding in people with Hemophilia A (congenital Factor
VIII deficiency). Your healthcare provider may give you ELOCTATE when you have
surgery. Important Safety Information

Do not use ELOCTATE if you have had an allergic
reaction to it in the past.

My name is Sara, and my
8-year-old son Evan has severe hemophilia A. 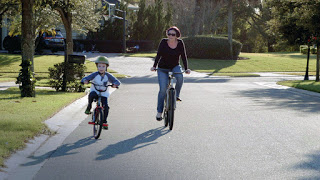 The circumstances surrounding
Evan’s diagnosis are likely familiar to many other families in the community—a standard
heel prick that wouldn’t stop bleeding, eventually soaking his newborn clothes.
I remember the nurse quickly whisking Evan down to the nursery, and I watched
as three, four, then five nurses dropped what they were doing and frantically
tended to our baby over the course of the next hour. The doctor finally told me
he suspected Evan had a bleeding disorder and gave a very brief description of
hemophilia.
This was not the life I had
envisioned for my family.
Fast forward sixteen months
later—I had studied every pamphlet and book and memorized signs and symptoms of
every possible bleed like it was my job. I kept on top of appointments and
diligently brought Evan to the ER each time he knocked his head. And then it
happened, my greatest hemophilia fear: a spontaneous head bleed. Hearing things
like, “subdural hematoma, evaluate the need to drill, lucky to be alive,”—all
of it was so surreal. I felt helpless watching my innocent 16-month-old fight
for his life.
I somehow found it in myself
to channel that fear and anger into fuel for managing Evan’s hemophilia. I
forced myself to attend social events and conferences, and ended up making a
great handful of friends who have become a part of my hemophilia lifeline. At
doctor appointments, I began to ask questions without censoring myself in order
to get answers I could understand.
I also began researching
treatment options. By learning about ELOCTATE myself, I was able to work with
my doctor to find the answers to my lingering questions, evaluate the risks and
benefits, and make an informed, educated decision with our physician to see how
Evan would respond to it.
Evan has been taking ELOCTATE
for his severe hemophilia A since August 2014. He does typical 8-year-old
things like riding his bike, running, or playing sports with his cousins.
They’re boys so they want to tackle and hit. Now he knows he has to play
two-hand touch and with the Nerf ball. His cousins have grown up with him so
they’re used to it. They’re attitude is just, “Okay, cool. Let’s go play.”
Since starting on ELOCTATE,
he hasn’t had any spontaneous bleeds. And he’s becoming more receptive to being
involved in his own care.
I’ll always be a protective
mom, but it means so much knowing I can count on ELOCTATE to help care for
Evan’s hemophilia. I am not only grateful for the opportunity to share my
experiences as a caregiver of a child with severe hemophilia A, but also to
provide some wisdom, and, hopefully, some inspiration to a unique, capable, and
fantastic community of people.
You can see more about Evan
and me in our video here  on the
ELOCTATE website.
__________________________________________________________________________________
Talk to your healthcare
provider about whether ELOCTATE may be right for you. Please visit www.ELOCTATE.com to read the Indications and Important Safety Information , as well as
the full Prescribing Information .
ELO-US-0880
02/16
This blog was sponsored by Biogen, for educational
purposes.