I attended the excellent annual meeting of the Arizona Hemophilia Association this weekend, invited by Cindy Komar, executive director and mother of a child with hemophilia. (Cindy is an awesome exec director and lady, if you haven’t met her!) It was great to catch up with so many Arizona families I know.

I did the keynote presentation yesterday but I myself didn’t find that half as interesting as a fascinating new program for families with hemophilia: called “My Life, Our Future.” The name is a bit nebulous, but the program is important. NHF has teamed with Biogen Idec, Puget Blood Center and ATHN to create the first genotyping of families and patients with hemophilia in the US. John Indence, from NHF, and Jennifer Dumont, director of scientific affairs from Biogen Idec Hemophilia, presented.
John summed if up first: this is NHF’s most important project. One blood sample per patient will reveal vital information on the patient’s specific hemophilia type, propensity to develop inhibitors, and more. A short movie featured NHF CEO Val Bias, who stated that this will help families understand their personal genetic profile, and also help researchers learn more about the genetics of hemophilia, as the data will be pooled. Best of all, the testing will be offered at no or low cost.
John explained how ATHN currently holds the most information/data on hemophilia patients in the country. Information is supplied from HTCs, who obtain patient consent; privacy of course is key, and ATHN assures complete privacy. And Puget Sound is one of the top HTCs in the country, and one of the top genotyping centers.

John noted that everyone in Spain and Ireland has been genotyped, and it’s time for the US too. As early as 1998, MASAC (NHF’s Medical and Scientific Committee) advocated for genotyping. IN 2008, the initiative got a boost when the Genetic Information Nondiscrimination Act (GINA) was passed, making it more reassuring for patients to share their personal health information.

In 2002, the human genome was sequenced at a cost of $3 billion; now, genotyping is much cheaper and the price per family keeps dropping. Genotyping helps uncover the causes of disorders, like hemophilia. It requires an analysis of the population, not just the individual, and the purpose of testing the individual is to aggregate the data to study the entire population. So, this new program requires the data of thousands of participants!
Jennifer Dumont then spoke and gave an excellent description of how genotyping works. She noted that 99.9% of our genetic makeup is the same! It’s the 0.1% that makes us all different. A genotype is “a description of the gene mutation that is caused by a certain condition or disorder.” A mutation is a change in the DNA sequence of a gene. It can happen in different ways: nucleic acids can be inserted, deleted or substituted in DNA, leading to a misreading of information in directing cells how to function.
There are diseases where one mutation leads to one disease, such as sickle cell anemia. Hemophilia is different: there are many possible mutations, such as missense, nonsense, frame shift, deletion and insertion. For factor VIII and hemophilia A, there are 2,513 currently identified mutations; for factor IX, there are 1,094 currently identified mutations. 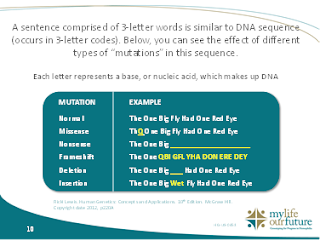 Jennifer illustrated what each mutation might be like if we used a sentence as a DNA sequence (three-letter words are similar to the DNA sequence of three-letter codes): “The One Big Fly Had One Red Eye.” Each mutation makes the sentence read strangely! The body can’t figure out how to produce factor properly when the instructions are so scrambled.
After the presentation, some great questions were asked, such as will Spanish-speaking services be included in the program to help Latino families? Answer: not at the present but this is something that NHF is keenly aware of.
Another question: If HCPs (Heath Care Providers)  know the risks of inhibitors from the genotyping, what can be done to prevent them form happening? Will it affect choice of product or treatment? Jennifer replied that it shouldn’t affect choice of product since there is no difference in the incidence of inhibitor development with different products, but physicians may closely monitor people in the first several exposure days to factor and possibly change how they dose if there is a known risk of inhibitors.
John also mentioned that if you’ve been genotyped before outside this program, you’d need to be genotyped again. And someday NHF hopes to open the program to those with VWD and other bleeding disorders.

The presentation was well done and gave rise to much discussion. The bottom line: to support NHF’s research efforts on the causes of hemophilia and its functioning, something that may help future children by our research now, ask your HTC how to participate in the genotyping program “My Life, Our Future.”

In this fictional tale, the narrator somehow visits an identical civilization to Earth’s, in every way, though he is on Uranus. But he learns that the thought processes and psychological lifestyles of these people are strangely different. They experience positive human emotions naturally. They experience negative human emotions only through machines designed to elicit them (very creatively told!). On Earth, we create negative emotions when they don’t really exist, or don’t need to exist, because there is no external “machine” that prompts them. Jealousy on Uranus is caused artificially. The parable is that we create our own misery and can just as easily rid ourselves of it through free choice. Eykis, a beautiful Uranian inhabitant, comes to Earth to observe and then leave us her gifts of observation, in how we can take advantage of our freedom not to engage in negative thinking, such as anger, anxiety, fear, jealousy, and above all, blame. Everyone is responsible for their own emotions. Great story, simply told, easy read, powerful message. Four/five stars.