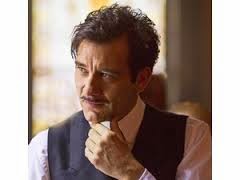 I heard about a new series on Cinemax starring Clive Owen, a favorite actor of mine, called “The Knick.” A fictional character, Dr. John Thackery, is a surgeon at the turn of the 20th century–a profession more akin to being a butcher than a doctor. Set at the also fictional Knickerbocker hospital, the series will portray medicine at a time when there was no anesthesia or antibiotics. I’d love to watch this to see Owen and the series, but alas, I don’t have TV. Not even Owen could get me to subscribe again!
But I do love the history of medicine. One of my favorite stories is the history of blood, particularly how physicians and researchers employed it and through research and trial and error, learned how to properly transfuse.
The ancient Greeks saw all phenomena as resulting from the interaction of four elements: air, fire, wind, earth. In the body, this manifested as “humors”: phlegm, choler, bile, and blood. The Greeks believed good health meant maintaining a balance in the humor, so draining blood (“blood-letting”) and purging the digestive system should help restore balance. 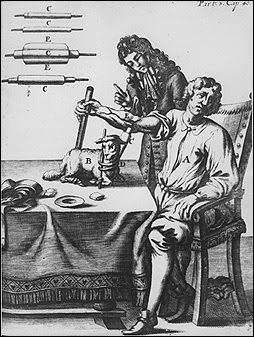 One of the first human blood transfusion first took place in Paris, in the 17th century. It took a wild and undiagnosed insane man, Antoine Mauroy, to help change the course of history. One night in 1667, in a frenzy, he shed his clothes, and ran through streets of Paris, setting fires. Dr. Jean-Baptitste Denis, physician to
king Louis XIV, had been experimenting with transfusing blood from animals into humans. He had his “aha” moment: let’s try this on Mauroy. He infused ½ cup of calf’s blood into the mentally besieged man. His reasoning was that the calf was a calm animal, therefore, its blood would be calm. Infusing it should calm the wild man.
This belief was called “vitalism”: that blood somehow carried the essence of the creature. A stag’s
blood carried courage; a horse’s, strength. A calf, calm.
Previous to this experiment, others physicians had dabbled in transfusions with animals. Richard
Lower, an English physician, tried transfusing blood from one dog to another: he figured out to use
artery into a vein and it worked. His findings about the transfusion of blood are often ranked among the most important discoveries in medical history. And he is still remembered one of Oxford’s finest doctors. The English medical community worked on transfusions a year before
Denis.

So back to the madman. Unfortunately, Antoine Maury eventually died after the third infusion. Dr. Denis was accused of murder, and later acquitted, but it turned out that Maury’s wife poisoned Maury! He wasn’t the only wild one in that family. Human transfusions were stopped, and another 150 years would pass before they were attempted again. 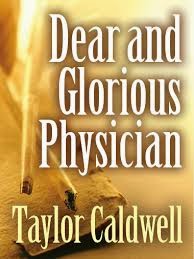 A fictionalized account of the Gospel writer Lucanus (Luke), who was Greek and also a physician. Beautifully written, lyrical, expansive, with excellent character portrayal, this story covers Luke’s childhood, his motivation to become a physician, the influences in his life that drove and tormented him to heal the sick and to seek out those who knew Jesus Christ. For Luke never met Jesus, though their lives intersected, and this book hypothesizes how his gospel came to be written. It’s an inspirational book about faith, and Luke’s rage against God and desire to heal in spite of God’s perceived callousness to his people. It’s abou treconciliation, as Luke eventually realizes what the spirit of God is about. Beautiful prose but at times over the top in length and description. Very long read but worth it. Five/five stars.