A Father’s Pursuit of Justice

After spending three incredible, wonderful days in Washington DC with our amazing community, it seems the right time to mention this unique book: Vial 023: A Father’s Pursuit
of Justice by Gary William Cross. 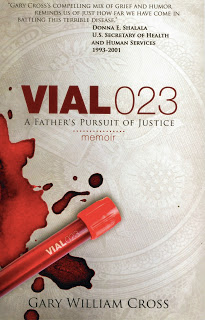 This is a poignant tale of parents who struggle raising a wonderful boy with hemophilia in the 1970s, only to learn later he has contract HIV. When their son eventually dies, the Crosses join forces with other advocates and activists to sue the pharmaceutical companies for negligence, and bring some sort of peace and truce to a fractured and angry community.

There have been many books written about the HIV scandal, most notably Blood by Douglas Starr, and And the Band Played On by Randy Shilts. There have been memoirs of loved ones who have died. But to date no one has told the story of how a select few in the hemophilia community brought down the rigid armor of big pharma, against all odds, while still mourning the loss of their sons, husbands and relatives.

The story is a memorial in many ways to Brad Cross, born on April 30, 1975 in Baton Rouge, Louisiana. Gary, his father, knew that wife Karen and her two sisters were carriers of
hemophilia.

Because of this, the parents suspected, and it was confirmed right away, that Brad had hemophilia. He was not circumcised but his heel prick bled. He was first infused with factor VIII concentrate at the six
months for a bilateral hernia surgery. By age 5, hemophilia seemed under control. The Crosses were excellent parents: Brad received treatment at the hemophilia treatment center at
Tulane University in New Orleans. Both parents worked to ensure two health insurance policies to cover mounting costs. The
family belonged to the Louisiana chapter of the
National Hemophilia Foundation.

When HIV was reported in certain groups of people, and suspected to be in the blood supply in 1985, Brad asked his HTC
hematologist point-blank whether he had AIDS. His physician did not answer, but later
informed Gary that Brad was HIV positive. The HTC had anonymously tested Brad’s
blood, and labeled the vial “Vial 023.” As the disease became full blown, Brad suffered seizures
and a gradual mental deterioration, losing
his speech and his ability to walk.

The narrative of the parents’ love for their son is gripping and evocative. It is a powerful testament to their love for Brad as well as their desire to not have others hurt that the Crosses helped to
initiate in 1991 a class-action lawsuit against four pharmaceutical providers
of the factor concentrate–Alpha, Armour, Baxter, and Bayer–a legal process
that would last 10 years and eventually include 124 families. The Crosses lost almost everything, including hope, but stayed the course, and in the end were victorious.

But not with Brad; he died at home
on April 16, 1993 just days short of his eighteenth birthday. The pharmaceutical
companies offered compensation of $100,000 to each HIV-infected individual with
hemophilia, but some opted for the class-action suit. Gary, a man with high principles, finally received personal apologies from the pharmaceutical CEOs.

As the mother of a child with hemophilia who has dedicated her life to helping this community, I believe this is a vital story to the hemophilia community’s unique and tragic past, and is a model of advocacy: what one man can do to change the world. Everyone should read it.

As an editor and author I would be remiss if I didn’t, however, point out some problems with the book itself. Expect an amazing story; don’t expect great writing. The text suffers from lack of good editing. There are typos, misspellings of names, and incorrect or incomplete medical and scientific terms. Some of the phrases are quaint and a throw-back to the 1950s. Some will make you cringe as politically or culturally inappropriate. Nothing is documented or footnoted; on page 114 Gary asserts that the four pharmaceuticals never spoke with each other as they were trying to control market share, perhaps not realizing that legally these companies cannot speak with one another due to anti-trust laws.

I recommend trying to overlook these and focus on the story. It is remarkable and Gary Cross is a modern day hero, as are the men and women who fought beside him, many of whom were at Washington Days last week, still fighting the good fight for the future of our children with bleeding disorders.

Gary and his wife, now
retired, continue to serve their community as volunteers and fund-raisers. You can meet them at hemophilia events. Gary serves as chair of the board of Patient Services, Inc. (PSI), which provides insurance premium assistance to families with chronic disorders.