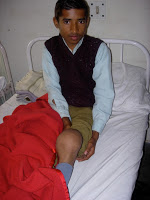 While we celebrated our own Washington Days at
the end of February, and have been observing March as official Hemophilia
Awareness Month, India has long been a leader in hemophilia advocacy. With a
projected population of over 100,000 people with hemophilia, and only about
15,000 registered, people with hemophilia suffer and even die regularly in
India. India has been lobbying its government for years, and finally the
efforts are paying off, despite competition for attention from infectious
disease groups, high profile crime, and politics. It’s a miracle hemophilia is
noticed at all, unless you meet the people behind the advocacy. I’ve been able
to work with them via Project SHARE and Save One Life and they are smart, savvy
and know how to get things done.

But progress is slow. Below is a recent article
about hemophilia care in the state of Maharashtra.

“Despite promises, 3,000 hemophiliacs in state
await medicines,” by Ananya Banerjee

Posted online: Mon Mar 04 2013, 05:25 hrs
Months after the Maharashtra government told the
Bombay High Court that it would provide free medicines to hemophilia patients;
the 3,000 registered hemophiliacs in the state are still awaiting the clotting
factors that are essential to any person suffering from the disease. Hemophilia
is a genetic disorder, which impairs the body’s ability to clot blood, thus
increasing the possibility of the patient bleeding to death.

Currently, the hematology center at KEM Hospital
gets the bulk of hemophilia patients, while a handful go to the other civic-run
Nair and Sion hospitals. The factors at KEM are purchased by the Hemophilia
Federation of India and disbursed at the centre.
“The government has made several promises to
support hemophilia patients, but next to nothing has materialized. The disease
is under-reported, especially in the rural areas. Many die due to lack of
access to treatment. Other states such as Assam, Uttar Pradesh and Madhya
Pradesh are giving free factors to patients,” said Dr Kanjaksha Ghosh, director
of the National Institute of Hematology.
Replacement of the factors VIII or IX, essential
for preventing continuous bleeding, cost a patient a minimum of Rs 9,000 ($165)
at one time. A severe hemophiliac may require as many as 1,50,000 units of
factor per year.

“The government has not made any move on providing
free factors to us. We have earmarked Rs 50,000 from the hospital budget to
treat haemophilia patients. This is, however, not enough,” said Dr Sandhya
Kamat, dean of KEM Hospital.
While the state currently has 3,000 recognized and
registered hemophilia patients and the city has 1,500.
The Haemophilia Society, Mumbai chapter, filed a
PIL in the Bombay High Court last year, demanding better treatment mechanism
for hemophiliacs and make treatment affordable and accessible. The matter is
still pending in court.
Meanwhile, the state, which launched its ambitious
healthcare scheme, Rajeev Gandhi Jeevandayee Arogya Yojana (RGJAY), last year,
has not managed to treat any hemophilia patient even after completing over
25,000 surgeries.
“RGJAY
is not the appropriate model for hemophilia treatment. For every infusion, the
frequency of which may vary, a patient has to get admitted to the hospital and
wait for factors before the treatment can happen. This is a waste of resources
and the money, which the beneficiary is entitled to,” said Paresh Parmar,
secretary of the Haemophilia Society, Mumbai chapter.
“What is required is setting up of centers across
the city and the state with trained staff and availability of clotting factors.
While the government has been assuring us these for a long time, nothing yet
has been done,” Parmar said.
I’ve been to KEM Hospital and know the Haemophilia
Society, Mumbai Chapter. They are miracle workers, helping hemophilia patients
with so few resources. Project SHARE is proud to continue to offer factor when
possible, while the local chapters and the national Hemophilia Federation (India)
continues to lobby the government for support. We wish them continued success.