Don’t recognize the name? You will. Alnylam is working on a
revolutionary hemophilia product, called ALN-AT3, that would require a
subcutaneous (under the skin) injection. It’s still in clinical trials and
we’ll relate more about its progress in the coming months. Alnylam caught wind
of Save One Life, the nonprofit I founded to help children with bleeding
disorders in developing countries.
They surprised us with a idea. They hired a live auctioneer,
held a big social event, and invited employees to come and bid on donated items.
Alnylam received over 100 items donated by employees and local businesses in
Cambridge, Massachusetts, their headquarters.
Hosted at La Laboratoire Cafe Art Science, it sounded like a
wonderful time. In addition to those who attended the actual auction, hundreds
of employees donated money. Some of the unique items donated included: dinners
hosted by executives, weekend vacation homes, homemade baked goods, sports
tickets, handcrafted items made by Alnylam employees.
One employee told me she sponsored a child as a Christmas gift for
her boyfriend. It’s amazing what can be accomplished when people act for the common
good.
Martha Hopewell, Save One Life’s executive director, and I had
visited Alnylam to do a presentation on our work, early in December. The
auction followed. I think the presentation hit home. 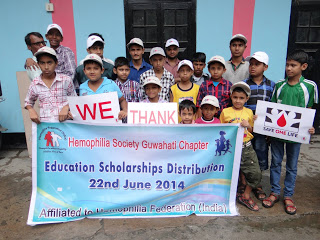 The total? Over $50,000! This is an astounding gift for Save One
Life, as we operate with tight budgets. And the very best part is the majority
will go to sponsor 20 children in poverty in several countries for five years.
This is a great model and inspiration for other pharmaceutical
companies in the bleeding disorder business. And an inspiration to us. Thanks
to everyone at Alnylam who donated. Your gift will make a direct difference in
a child’s life for years to come. What better gift than that?

PrevPreviousHey You! Leadership U
NextA NEW HEMOPHILIA A TREATMENT FROM BAXALTANext