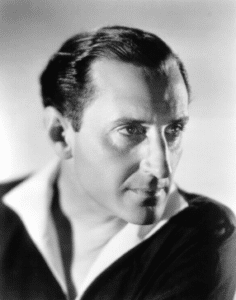 Who would you pick as a celebrity spokesperson for our bleeding disorder community?

Celebrity status automatically captures the public’s attention. And our community wants to be noticed—for public awareness, for outreach, and just for the pleasure of being recognized. Soon after its founding in 1948, National Hemophilia Foundation (NHF) chose actor Basil Rathbone as its celebrity spokesperson. From the beginning, NHF wanted to be recognized. But why Rathbone?

Basil Rathbone (1892–1967) may be familiar to you, especially if you enjoy older movies. At one time, Rathbone was very well known, most famously as Sherlock Holmes. He appeared in 83 films from 1921 to 1967. Plus, he performed in the theater, on the radio, and for live television. Born in South Africa and raised in England, Rathbone began his career in 1913 as a classically trained Shakespearean stage actor. He saw combat in Europe during World War I.

In 1921, Rathbone debuted in his first silent film. He then moved to America. Rathbone kept his English citizenship, and he took frequent trips to London. Eventually, Rathbone wanted to return to his first love—acting onstage. In 1947 he left Hollywood for New York City, where NHF had its offices. So it made sense for NHF to ask Rathbone to be a celebrity spokesperson.

In the early 1950s, Rathbone was at the height of his acting career on stage, screen, and radio. He could sing and dance, and was a skilled swordsman. He did paid advertising for cigarettes, liquor, insurance, and diet food. Amazingly, he played 52 roles in 23 plays by Shakespeare. Over seven years starting in 1939, Rathbone starred in the role of detective Sherlock Holmes in 16 films and 275 radio episodes. Rathbone was rewarded with two Academy Award nominations. His popularity would peak again later in the 1960s, when his Sherlock Holmes films were broadcast on television.

Despite his wide range of roles on stage and screen, Rathbone is mostly remembered, regrettably, as a type-cast villain. His villainous roles include Mr. Murdstone in David Copperfield; the Marquis St. Evrémonde in A Tale of Two Cities; Captain Esteban Pasquale in The Mark of Zorro; and probably his most famous role, Sir Guy of Gisbourne in The Adventures of Robin Hood.

In 1966, Roger Corman, a producer at American International, hired Rathbone for the film Queen of Blood (Planet of Blood). Rathbone played Dr. Farraday, who, in 1990, sends a team of astronauts to Mars to rescue a crashed spacecraft. The astronauts return with a survivor—a green woman named Velana. The astronauts quickly learn that Velana is a vampire who kills her captors, and that she also has hemophilia.

Velana bleeds to death from a scratch, leaving behind her eggs. I admit, this is one of my all-time favorite science fiction/horror flicks, originally shown at drive-in theaters. NHF chose Basil Rathbone as a celebrity spokesperson for only a short time. We don’t know whether he had a family connection with hemophilia. Although he performed in two movies that include hemophilia,

Rathbone was probably more concerned with earning a salary than promoting a cause. Yet we can always be grateful for any celebrity spokesperson.

Who would you choose to speak for our community today?

For more info, read Rathbone’s autobiography, In and Out of Character (1962); and Michael B. Druxman’s biography/filmography, Basil Rathbone: His Life and His Films (1975).

For more articles like this check out Richard’s Review, published in every issue of PEN!