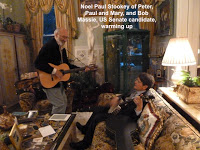 I had the great privilege to attend a private event that was to have been a fundraiser for friend and US Senate candidate Bob Massie, of Journey fame. For you hemophilia young-ones reading this, Journey was I think the very first book on hemophilia ever written. Certainly the first written by parents of a child with hemophilia. The book details life for one family in the 1950s and 60s, who later became famous as parents Robert and Suzanne authored and published the classic Nicholas and Alexandria.

But back to the event. The entertainment for the evening was the humble, humorous and infinitely talented Noel Paul Stookey of the incredible group Peter, Paul and Mary, perhaps best known for their song “Puff the Magic Dragon.” I arrived early to the stunning home of Mark and Becky Levin in Boston–the traffic was light and the weather warm. What a great night to hang out in Boston! 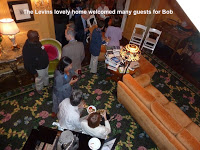 Noel was so gracious and unpretentious. He and Bob have been friends for 30 years, since Bob was young. The group became friends of the Massies, and I recall from the book Journey, how Noel would sing to Bob when Bob was trying to survive terrible bleeding episodes. And here they were together again!

We were all very sad to hear that night that Bob would the very next day announce his withdrawal from the US Senate race. He gave it a good fight, and spent countless hours traveling the state, meeting everyday people, and rallying people to hear his thoughts about our country and his plans to represent Massachusetts. As someone who suffered, truly suffered, with hemophilia, then HIV and hepatitis, he really could speak out on issues of chronic healthcare. Bob is incredibly intelligent, down-to-earth, educated and passionate. He has already had an amazingly accomplished life, but still wishes to do more in public service. What a hero he is to us all! 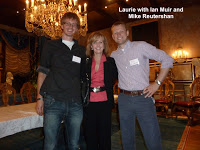 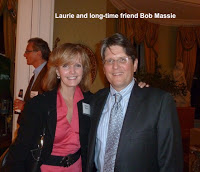 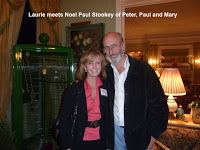 He read his withdrawal speech, which included: “I know how hard people are struggling today. In a hundred speeches I have defended the right of every citizen to a good home, a good school, a good doctor, and a good job. I have also said that despite the difficulties we are facing today, we must not forget our opportunities and responsibilities for tomorrow.” And towards the end, “We all have a role to play in this. This is an extraordinary state filled with extraordinary people and we are capable of extraordinary achievements. I plan to play my part moving forward.”

We sincerely hope this means he will return to public life, for if anyone could represent the needs of those with hemophilia and chronic disorders, it’s Bob Massie. 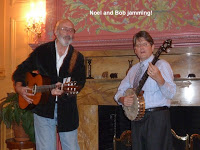 After his speech, Bob and Noel played a song together; Noel on guitar and Bob on banjo. Guests offered their tributes to Bob and congratulated him on his efforts and praised him for his dedication. All in all, a wonderful evening, filled with gratitude to Bob, pride in our state.

Stearns, the president of World Vision, offers an inspiring call to action to help the world’s poor. He attempts to answer the question, “What does God expect of us?” He does not let fellow Christians off the hook just because they go to church, know the Bible, attend Bible study classes and help their neighbors. He wants them to take part in a social revolution to save the world, specifically, to help those in need in Africa. Stearns shares his startling story about life as a high-rolling, wealthy CEO of Lenox, the provider of luxury china products. When tapped to be the next CEO of World Vision, Sterns had to make a difficult choice: uproot his five children and wife to Seattle, and take an enormous cut in pay and lose all his corporate perks and benefits. After much soul searching, he accepted. He shares what he has experienced in his job, along with his theology of Christianity in action.

It’s a compelling read, and certainly makes you look at your own life, your possession (how much do we truly need in this life anyway? What would we really miss if we gave more to help the poor?) and your beliefs about the poor. It’s not flawless, and some of the reading gets quite heavy-handed. A book review on The Gospel Coalition website says, “The Hole in Our Gospel is also theologically flawed and economically misguided… but its overall charge to care for the poor and put our faith into action is a good and necessary challenge.”

And despite taking a pay cut, Stearns still takes home a healthy $400,000 annual salary; World Vision is also not without criticisms of how the $800 million organization is run in the field. Still, you can’t doubt the author’s sincerity and depth of his calling. I don’t agree with his hero-worship of Bono; and the pages and pages and pages of glowing testimonials in the beginning actually cause the antithesis of purpose—I was very suspicious of any book that must call so much attention to itself. Why not allow the reader just to read and form their own opinion first without biasing them? But I read, and was profoundly moved as I had just returned from Africa, have seen what he has seen, and believe what he believes about social justice and about how we can each do more to help those in poverty. There’s a lot of theological interpretation you can argue, as he quotes and interprets the Bible throughout, but his social message is loud and clear, and he is a man who is walking the talk. He visits the poor; he strives to solve their problems; he does it with love; he makes results. Kudos to him! Three stars.