Cambodia: From the Killing Fields to a Land of Hope

1,256
After breakfast on
Saturday October 4, I went with the “tuk tuk” driver to pick up Sithan. The tuk
tuks are autorickshaws—motorcycles with rickshaws attached to them. Sithan is
the 33-year-old president of the Cambodian Hemophilia Association (CHA), who
has hemophilia. He was to join me today for a tour. When we got to his home, he
met us at the gate not looking well. Pale, tired… he was bleeding from a
serious dental extraction last week and it was really bothering him. We brought
factor for him on this trip, and he had already used several vials, but now
needed rest.
So I went alone to
the Choeung Ek Memorial, the “Killing Fields,” so dubbed by Dith Pran, the
Cambodian journalist who was portrayed in the movie The Killing Fields. This would be my second visit to a genocide
site (my first was in Rwanda earlier this year).
The tuk tuk ride
was insanely wild, like being on a run away roller coaster. We jostled through
the streets of Phnom Penh, dodging cars, motorbikes and other tuk tuks. The tuk
tuk is open-sided, with a roof. The wind whipped my hair; the air is
gritty with pollution. I can’t help but think I’m in a little cart at a
low-budget Asian Disneyworld, on Mr. Toad’s Wild Ride. Motorbikes, carrying
young ladies with pink helmets, young men with intense looks wearing surgical
masks, even children—some sandwiched between the father driver and mother
passenger, sound asleep—swarm the cars and tuk tuks like ambitious bees.
Contributing to sensory overload are the odors: diesel fuel, thick, acrid
exhaust from vehicles; sudden sour smell of rotting garbage as we cross a bridge;
a surprise charcoal smell laced with delicious scent of roasted beef. 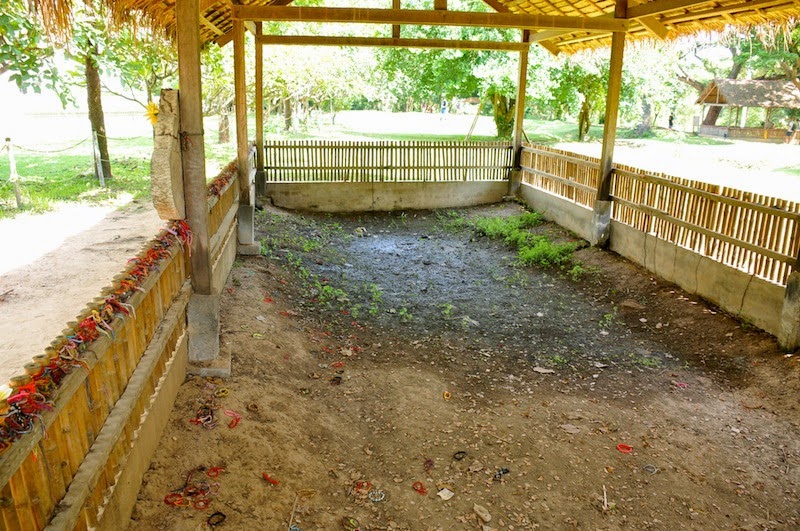 My driver took
back roads and alleys, some of which were nothing but huge mud puddles from the
rain. I actually started feeling really queasy and nauseated. I was glad that
Sithan stayed home!
We arrived after
40 minutes and the driver sat in the lunch area while I paid the $6 admission
and picked up a headset and started the tour. Overhead was a brilliant blue sky
with a glaring sun basking us in 90° sunshine. Directly in front of me was the
huge stupa, or Buddhist temple. The
soothing and paternal voice on the headset said to go there last. The narrator
himself survived the vicious Pol Pot regime and felt honored to be able to
narrate what happened. There were many killing fields throughout Cambodia but
this was one of the most famous. There wasn’t much to see; some signs informed
us of what once stood there—the area where trucks would disgorge prisoners
(prisoners! They were men, women and children, average citizens), the place
where prisoners would be registered.
But there were graves of hundreds of victims, vaguely protected by a
small stockade around each mass grave. The first grave contained the remains of
450 victims; a sign told us that each time it rains, more remnants are
unearthed. It is not unusual to find human teeth or small bones still, after
all these decades. Clothing was displayed, and the bones of victims. As I
listened to my headset, a one-legged, dirty man stood by a tree; we were separated
by a wire fence, that’s all. He was begging, begging in his own country. I
handed him a $5 and he asked, “America?” And I nodded and smiled.

The Pol Pot regime
and his Khmer Rouge fighters took control of the country from 1975-1979, in the
attempt to create a Communist utopia. Pol Pot believed it was possible for
Cambodia to be self-sufficient, and in the process, dragged his country back to
the Stone Age, where everyone had to work communal farms, with no equipment or
machinery. All foreigners had to leave. Next came the purge of any
intellectuals: doctors, teachers, lawyers. Anyone educated was at risk of being
tortured and killed, and this was done in crude and primitive ways. Eventually
victims were brought to the Killing Fields, where they were murdered. Whole
families were wiped out. These are sites where unspeakable atrocities took
place. I reflected that from 1975-1979, the years I was in college, enjoying
life, going to dances, studying, eating, having fun… an entire generation in
Cambodia was being wiped out. While I slept peacefully in my bed each night, Cambodian
children were starving, dying, mothers and families were being tortured. They
were living in hell, imposed on them by their own rulers.

I approached one
mournful monument, a tree, where babies were bashed to kill them, then tossed
into an open grave. The tree was decorated with little wrist ties of many
colors (you receive the ties when you make an offering at a Buddhist temple).
They looked like little yarn butterflies fluttering in the wind. The graves were
simple, marked with hand-carved signs. The bones, like those in Rwanda, were
out in the open. Nearby, a huge tree stood, a survivor, a mute witness to the
atrocities from the past. On it the Khmer Rouge rigged up loud speakers, over
which was played constant, loud propaganda from the screeching voices of the uneducated
soldiers. The loudspeakers also covered up the screams of victims.

Eventually I came
to the stupa. It is steady, solid,
soaring… and stacked with skulls. Perched on the corners of each section are
stone mythical creatures in Hindu religion: Garuda,
the winged birdman who carries Lord Vishnu. And Naga, a dragon/snake that is Garuda’s enemy. That they appear
together here denotes peace. After removing my shoes respectfully, I climbed
the marble stairs, which are strangely cool, even in the suffocating heat.
Facing me is a clear, acrylic wall, encasing thousands of skulls, bleached
white, stacked neatly. Each skull has been analyzed and marked with a color dot
to denote its sex and how the victim was killed. They were killed in many
different ways but all primitive: cleaning rod was a favorite method. You can
look at eye level into these skulls, which were once peaceful, innocent people,
mothers and fathers, young men and women. You feel like talking to them,
apologizing, wishing they could have a chance at life, a normal life. Buddhists
believe in reincarnation, and looking at the bashed and pierced skulls, you
want to believe this is true for their peace. So few of us ever get to see a human
skull. When you gaze at one, emotions aside, you marvel at its architecture:
the nasal passage ways are intricate and refined, thin sheathes that capture
minute scents; the occipital bones are strong and full of character, creating
almost a surprised look. You’re reminded that each of us has one of these hollow-eyed,
whitened shells within us too, and, Caucasian or Khmer, we all look pretty much
the same once the skin is gone. 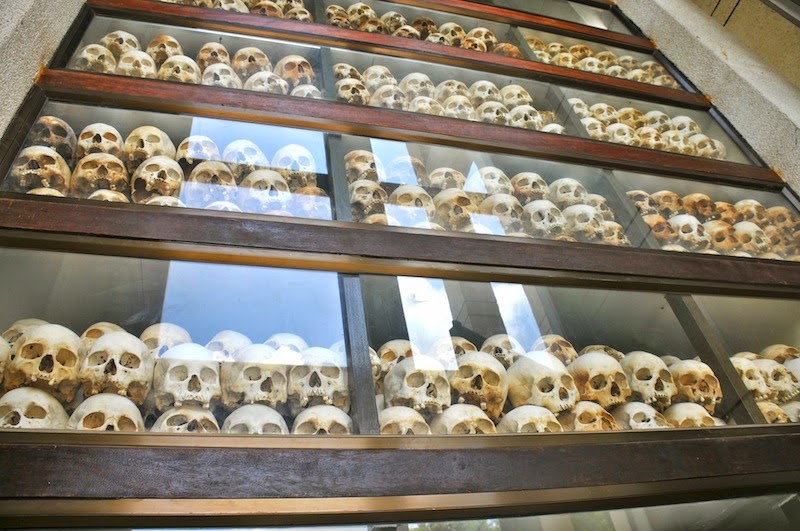 It started to
downpour as I left, as the heavens opened and “threw down their spears.” (well,
it was stars in the poem) The driver unfolded the tuk tuk’s side canvas to
protect me from the rain, but with him driving, and other motorbikes and tuk
tuks throwing up water and mud, it was pretty messy, and yet refreshing as the
temperature has been a steady and muggy 90°.

Monday October 6, 2014
We’re in Siem Reap today, where the ancient temples of Angkor Wat are, a World Heritage site (though better known in the west for being the location of the filming of “Tomb Raider”). After a great breakfast in the hotel, where they cater to your every
need, Martha, Sithan and I headed in a tuk tuk
to the Angkor Children’s Hospital nearby. Already 20 children and their
families were waiting for us. Cambodians are a truly beautiful people. I loved
seeing the little children’s faces turned up at me, mixing shyness with
curiosity. 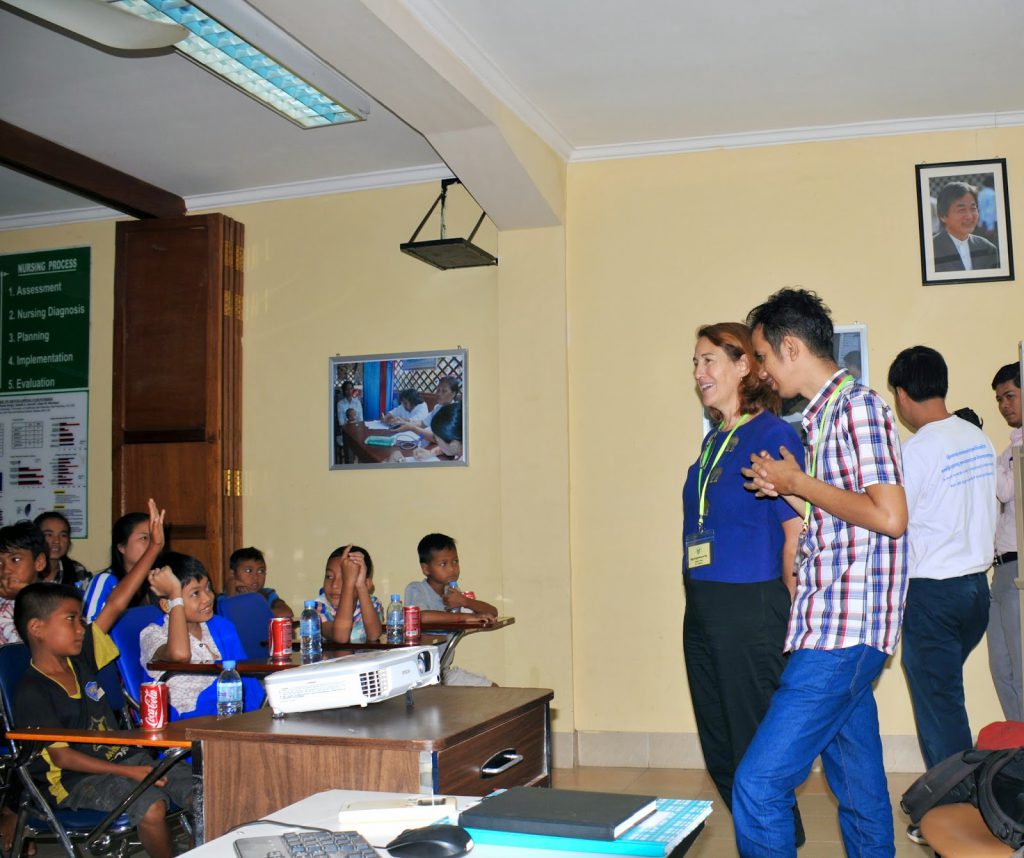 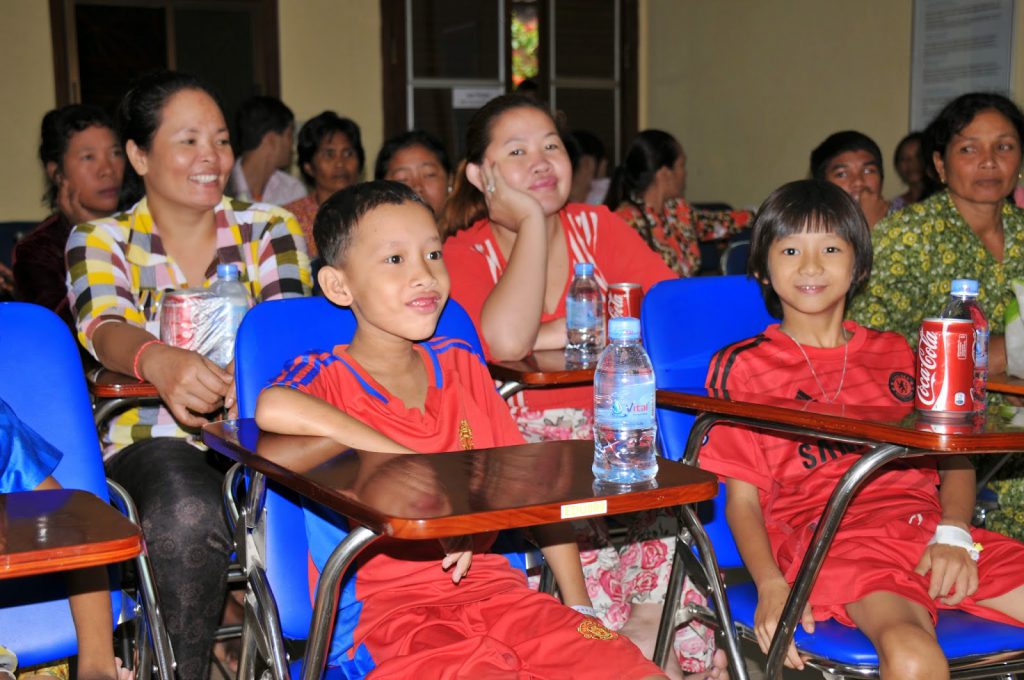 Martha gave a presentation about
Save One Life to the audience while Sithan translated. It was a long day in some ways:
sitting in a hot meeting room, tightly surrounded by incredibly impoverished, often illiterate, families whose children have bleeding disorders. We were only going to
interview three families, but instead, we decided on the spot to interview them
all! So sitting in chairs that are like elementary school chairs, with a small
tabletop attached, we divided up the families. Soreng, the social worker, took
some; Martha and Sithan took some; and the Dr. Sing Heng and I interviewed some. It took about two full hours, maybe more.
I also photographed them all. I handed out the gift bags, which were an
enormous hit—each child received an authentic Beanie Baby and some toiletries
and candy. The kids were adorable and mischievous, giggling and casting glances
at me, some brazenly looking and smiling. We connected with almost all.
As we interviewed, sweat
constantly slid down our backs, dripped off our hair, but what an honor to meet so many! The local volunteers here did a great job mobilizing the families. The families were given
meals in Styrofoam boxes, for which we paid. The hospital would kindly cover
their transportation costs.
The stories are sad; some
heart-breaking. One boy with hemophilia, about 20, has mental issues; his
mother is partially paralyzed. They are very poor and have such hard lives. All these children will be available for sponsorship through Save One Life (http://www.SaveOneLife.net)

It was tender, and heart breaking.
It’s easy to feel overwhelmed, almost defeated when facing the crushing truth
of poverty and hemophilia. Will we ever make a difference? And then, I think, if
we were not here, who would help them? Just $22 a month can truly change their
lives. We’ve seen it happen in other counties, and we are going to see it happen
in Cambodia.
(Do you see a child you want to sponsor? Email me at laurie@kelleycom.com!)
Great Book I Just Read
Survival in the Killing Fields [Kindle]

Haing S. Ngor
Ngor is famous for
portraying the journalist Dith Pran, the subject of the 1984 movie The Killing
Fields, which won Best Picture, and earned Ngor, who was not an actor, Best
Supporting Actor. Ngor himself escaped the Killing Fields, but spent four years
working hard labor and starving on a communal farm. He had to hide his
profession as a doctor or he would have been killed. He was tortured several
times, brutally, and endured chronic starvation and deprivation. The story is
an easy read technically, but difficult emotionally. He reveals all that he
experiences from the point of view of the victim; he didn’t understand what was
happening, never heard of Pol Pot, and could only focus on survival. Eventually
he escapes in the last throes of the regime, when the North Vietnamese invaded,
and enters Thailand. He makes his way to the US, a broken man, angry, but still
surviving. Though he became a Hollywood overnight sensation, his life still did not go
easy. This should be required reading for high school students, and any fan of
history and survival. Four/five stars.