We repeatedly hear the message that regular exercise is beneficial for our health and well-being. Yet always heeding that advice over a lifetime can be a challenge. My suggestion? Include dancing as a fun component in your repertoire of exercises.

Exploring the world of dance, I became intrigued with Janet Baldwin, a hemophilia carrier. Janet made a lifelong career of dance in Canada, even performing at the 1936 Olympics. As part of her legacy, Janet inspired the award-winning Canadian author Timothy Findley to create a fictional character modeled on her life.

Catherine Janet Baldwin was born in 1912 in Toronto. Her family were descendants of the politician Robert Baldwin (1804-1858), who in 1841 brokered the coalition of Upper and Lower Canada—now known as Ontario and Quebec. This was an important step in the eventual formation of the provincial government of Canada. Something of a rebel in her wealthy family, Janet followed her passion for dancing to become a professional dancer,teacher, and choreographer. She studied ballet in Canada, America, and England. Janet went on to found her own ballet studio and to co-found the Canadian Dance Teachers Association. She was a member of the Royal Academy of Dancing. 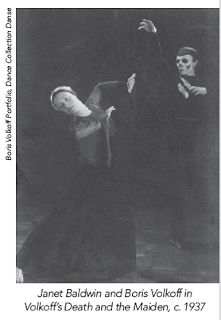 A boost to Janet’s early dancing career was her 1936 marriage to Boris Volkoff (1900–1974), a ballet master who is sometimes called the father of Canadian ballet. Janet progressed from being Volkoff ’s student to being his wife and then his business partner in the Boris Volkoff School of Dance. Janet’s family did not approve of the marriage. The older, irascible Volkoff kept his Russian accent. He taught the more athletic style of ballet that he learned in Russia before defecting to Canada in 1929.

The couple’s personalities contrasted: Janet was known for her infectious energy, while Volkoff was considered flamboyant. Just a month into their marriage, the Volkoffs led a delegation of about 14 amateur Canadian dancers to the International Dance Competitions at the 11th Olympic Games in Berlin, 1936. The Germans wanted “art competitions,” including dance, 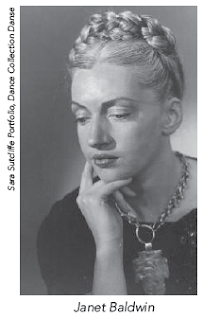 added to the Olympics, but the International Olympic Committee denied the request. Instead, the choreographer Rudolf von Laban organized dance celebrations before and during the athletic events. For political reasons, countries including America, England, France, Sweden, and Russia boycotted the dance competitions held in Nazi Germany; still, 14 countries participated. Because Olympic medals could not be awarded in dance, each participating dancer, including Janet, received a diploma. Volkoff, always a promoter who loved to exaggerate, maintained that of the six honorable mentions awarded, the Canadians were the only amateurs, while the other countries had professional dancers. Returning to Toronto, in 1938 Volkoff formed the Boris Volkoff Canadian Ballet, a nonprofessional ballet company, with Janet as his business partner. The couple also helped to organize the annual Ballet Festival, beginning in 1948, which brought together the existing Canadian ballet companies. Volkoff envisioned a touring professional company, but failed in his effort to be artistic director of the newly founded National Ballet Company of Canada in 1951.

Instead, the chosen director was Celia Franca, who promoted the British style of ballet, leaving Volkoff bitter and disillusioned.
The Volkoffs had a contentious marriage. A major issue was children. Volkoff wanted children, but Janet felt she shouldn’t have any because she was a hemophilia carrier. She feared that any male child with hemophilia would bleed to death. Janet had multiple abortions in Buffalo and Chicago under appalling conditions. After Volkoff had affairs with younger women, the childless couple divorced in 1951. Volkoff remarried, but when he was alone and dying in 1974, Janet remarried him without a license in a religious ceremony. Janet founded the Janet Baldwin School of Dance, and directed it for over 25 years. Late in life, she developed emphysema and, at the end, dementia. Janet died in 1990 in Toronto. Very little information is available about her family history of hemophilia, almost as if the family wanted to keep it secret. No other family member is identified as having the hemophilia gene, and Janet’s medical issues involving hemophilia are unknown.

Timothy Findley (1930–2002), author of The Butterfly Plague (1969), grew up in the prestigious Rosedale section of Toronto. He first met Janet Baldwin—notable for her white hair, blue eyes, and poise—when he was about seven years old. He remembered Janet dancing on the beach sand, or elegantly dressed at the Atlantic House Hotel in Maine where both their families vacationed every summer. Findley studied ballet, first from Volkoff and then from Janet, before a back injury ended his dancing career. He remembered the bruises caused by Volkoff ’s black walking stick, known as “Volkoff tattoos,” during his ballet lessons. Findley then turned to speech and drama classes so he could express himself as an actor before becoming a writer. The Butterfly Plague is set in Hollywood, 1938. Findley based his fictional character, Ruth Damarorsch, on Janet Baldwin—his friend,
teacher, and dance collaborator—even dedicating the novel to Janet. There are several similarities
between the real Janet and the fictional character: both are hemophilia carriers with white hair and
blue eyes. But there are also some differences, for example, in physical appearance and talents. Ruth wins three gold medals in swimming at the 1936 Berlin Olympics. She eventually has children in the   edition of the novel, but not in the 1986 rewritten edition.

Yet as hemophilia carriers, both Janet and the fictional Ruth felt they had “tainted blood.” Being a hemophilia carrier didn’t prevent Janet Baldwin from dancing her entire life. Sadly, based on the medical care available in the 1930s and 1940s, Janet feared that any of her children would die from hemophilia, so she did not car ry any pregnancies to term. Fortunately, today those medical concerns are allayed with appropriate treatment. I hope Janet’s story will inspire you to consider dancing as a form of exercise throughout your life. If you’re wondering whether I follow my own advice, let’s just say that I tend to dance in private.