A Decade of Dedication! 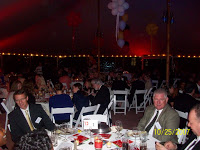 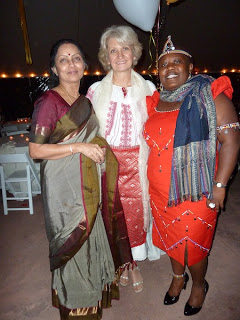 Guests came from Texas, Tennesee, New Jersey and Ohio in the US, and India and Kenya internationally. The attendees were a mix of corporate donors, individual donors and sponsors of children with hemophilia. Adriana Hendersen of North Carolina, dressed in traditional Romanian attire, represented our Romanian partners. Even the band, Wildest Dreams, included musicians with various nationalities, as they played “Save a Life” in honor of our achievement.

Chairman of the board Chris Lamb started the evening by thanking everyone for attending, thanking our corporate donors, especially Octapharma, which was our presenting sponsor of the event. He reminded everyone that while we are now sponsoring 758 children in 11 countries, we hoped to reach our goal of 1,000 this year. Executive director Martha Hopewell recounted how Save One Life began, after I had visited the home of Mohammad Ali in Karachi, Pakistan in 1999, and learned that only $20 a month would keep that 8-year-old boy in school, to give him a better life. Save One Life offers sponsorships for individual children with hemophilia in developing countries for only $20 a month. 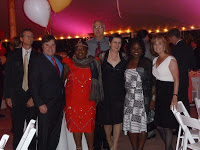 Then Maureen Miruka, stunningly adorned in a traditional red Masai outfit, shared what life is like in Kenya with hemophilia, and how her two first-born sons died young of complications related to hemophilia. This compelled her to do something to change the medical system and to improve the lives of those with hemophilia in Kenya. She is now president of the Jose Memorial Hemophilia Society. 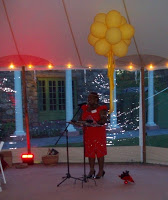 During a delicious dinner with complimentary wine, I then presented the awards: Program Partner of the Year went to Hemophilia of the Philippines-Cebu, particularly to Ms. Agnes Co who always provides her reports on time and completed, making our job easier! Sponsor of the Year went to Mr. Wolfgang Marguerre, chairman of Octapharma, for his sponsorship of 70 children. And finally, a special award went to my mother, Eileen Morrow, of Springfield, Massachusetts, who was in attendance, for her amazing donation. She has gifted 50 acres of land in Charlton, Massachusetts to Save One Life to start an endowment in my grandmother’s name. The land is worth about half a million dollars and represents most of our family’s inheritance. The endowment, the Florence Ashe Hogan Memorial Endowment, will yield investment returns annually which can be used for operating expenses at Save One Life.

Finally, my friend and colleague Usha Parthasarathy, shared our experiences together traveling throughout India last fall, and reminded everyone that India represents half the number of beneficiaries in Save One Life. It’s an important country and program partner, where great things are happening. For example, Avik, a poor boy from Calcutta whose father is a humble shop owner who sells tea, completed his Save One Life sponsorship by finishing medical school, is now a doctor, and he passed along his sponsorship to another impoverished family!

Wildest Dreams then performed “One Voice,” a song they had already written, but which happens to be the name of our newsletter! 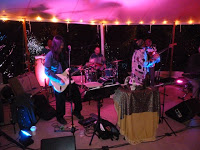 Everyone commented on how classy the event was, what a great time they had, and how proud they were of Save One Life!

To sponsor a child in need: www.SaveOneLife.net

Best known for his role in the legendary shootout at the OK Corral in 1886, Earp was more than the most famous US federal marshall. This book expertly follows his life from Kansas to Arizona to California, and his career as gambler, saloon keeper, security guard, federal marshall and small-time land speculator. He was a complex man: a Peacekeeper and expert shot who loathed to shoot; a lawman who loved to gamble and keep with prostitutes. A man who evaded bullets in the thick of a gunfight. A lawman who took the law into his own hands and led his famous vendetta against the “Cowboys” who killed his brother. No wonder he became an American legend through countless articles, movies, TV shows, and books.

This book is extremely well written and researched. Tefertiller is a journalist and is shows with his numerous references and objective style. I was fascinated by the political dueling newspapers in Tombstone and how this influenced events at the OK Corral and beyond. Tefertiller also gives an in-depth report of what happens after the shootout: the jail sentences, trials… things not shown in the glamourized movies about Earp. Most amazing is how trouble seemed to follow Earp, even years after the events in Tombstone.

The story of course is filled with real-life characters who are all now part of the legend of the Wild West: Doc Holliday, Johnny Behan, Curly Bill Brocius, Ike Clanton, Texas Jack Vermillion, Turkey Creek Johnson, Mattie, Sadie, and the Earp brothers–Jim, Warren, Virgil, and Morgan. While the movies, particularly 1993’s Tombstone, makes them into colorful characters, this book makes them real.

A highly recommended book for admirers and students of the American west and our cultural history. Four stars.

PrevPreviousOur Heritage, and a Great Mother’s Day Gift
NextRefer a Friend, Get $10!Next