Previously printed in PEN, May 2018

When children are diagnosed with hemophilia, they are each given an essential diagnostic label: for example, hemophilia A or hemophilia B, severe, moderate, or mild. These labels originate from a lab analysis of the child’s blood. The diagnosis determines what type of factor replacement therapy each child will get. Labels like these can help draw a picture of who your child is and what he or she needs. But when it comes to dosing and prophylaxis regimen, sport choices and bleeding patterns, and even pain management, your child with hemophilia is unique. Diagnostic labels don’t adequately explain a person’s individuality and needs. 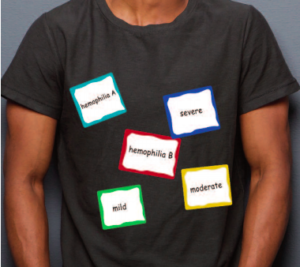 We asked parents from Facebook about their children with hemophilia: Has anyone ever used the labels of hemophilia to categorize your child, which resulted in limiting treatment options, or limiting what people think your child can do? What is it about your child that is not “typical” for someone with hemophilia? The responses poured in. While a child’s uniqueness may be revealed in a preference for certain sports or a physiological reaction to a particular product, most of the parental responses we received were about each child’s unique half-life, and about subsequent bleeding patterns.

Half-life was barely mentioned when my son was born. In the late 1980s and early 1990s, we dosed his factor using a chart based on his weight; it was very mathematical. We took one-half of his weight in kilograms times the factor level we desired, and this equaled the number of units of factor VIII we needed to infuse. Over time, as parents, we developed intuition about how much or how little factor our son needed based on his response to factor and his bleeding patterns, and we could adjust his dosage ourselves.

Up until about the last 10 years, hemophilia treatment centers (HTCs) often prescribed factor dosages based on weight, and determined a prophylaxis regimen based on a strict protocol from clinical studies. We now know that every child needs to have a pharmacokinetic (PK) or recovery study done to determine his or her individual, unique half-life response to a specific factor VIII product. Determining the unique half-life can help hone the amount of factor a child should receive, or indicate the best prophy regimen. A short half-life may mean more frequent infusions, higher doses, or the use of extended half-life products.

If anyone knows about the uniqueness of factor half-lives in children with hemophilia, it’s June Reese, who has four sons with hemophilia. She says, “One son has always had a short half-life and has really struggled with bleeds. His teachers often compare him to his brothers, one of whom never bleeds.” And this was a problem for the Reese family: in categorizing two brothers with textbook half-lives as “normal” for hemophilia, teachers dismissed the third brother’s frequent bleeds—they thought he was being careless, or worse, that he was imagining the bleeds.

Crystal Eskine has two sons with severe hemophilia A, ages 9 and 10. “I expected two similar stories,” she laughs. Despite having the same diagnosis as his brother, Crystal’s 10-year-old bleeds spontaneously, “if you look at him too hard.” Her younger son “never needs factor,” and “he isn’t even on prophy he bleeds so little!” When Crystal’s doctor wanted her to adhere to a traditional dosage and infusion schedule with her older son, her gut instinct told her it wasn’t good enough. She knew her children’s unique responses to factor. “I started giving my older son double doses. I took notes, showed our doctor, but he still he thinks I’m worrying too much, while I still don’t think the dosing regimen is good enough.” Crystal continues, “I’ve asked for a PK test, with blood samples taken over a much longer time period, but he has said no.”

And then there is Jen Miller’s five-year-old with severe hemophilia A. Jen calls him a “typical boy” who enjoys video games, swimming, T-ball, and playing with his friends. His

factor half-life is very short, which is not typical, but this doesn’t seem to impact his bleeding patterns.

When a shorter half-life does impact bleeding patterns, and parents instinctively know something isn’t right, they need to alert their HTC staff, sometimes to prove that their child does not fit a category or label. In these cases, parents should request a PK study. Crystal laments, “My boys’ hematologist makes me feel like I’m doing something wrong, but refuses to do a PK study.” June adds, “For years, our medical staff acted as though we were to blame when he’d have bleeds—even though he was infusing regularly.”

Kate Stotz, who has a 22-month-old with severe hemophilia A, felt she had to fight against the standard prophy infusion schedule of three times a week. “This was not working for our son,” she explains. “He was having frequent bleeds on Sunday, the day he was unprotected. Trough levels indicated that in order to maintain a minimal 1% trough, we could not exceed 48 hours between infusions.” Though Kate wanted to infuse every other day to keep him protected, her son’s hematologist didn’t want to break from the traditional schedule the HTC normally prescribed. “It took a lot of advocating on our part and ultimately finding a new doctor at a different HTC.”

Sarah Hueston successfully advocated for a new prophy regimen for her 16-year-old son with severe hemophilia A, who plays two varsity sports. When they determined he had a short half-life, the HTC team, Sarah, and her son developed his treatment plan together. He now infuses standard factor daily. “It’s what works for us,” says Sarah, “and his doctors are so proud of him, as are we, his family! Never did we think he’d be doing the things he’s doing even 10 years ago!”

By logging her son’s bleeds, Stacey Mollinet was able to convince her HTC team to change the treatment schedule. When her son with severe hemophilia A was a young teenager, he didn’t bleed like a typical severe and was not very active by nature. “I had to push the HTC,” she recalls, “so he could treat only twice a week, instead of a standard prophy schedule.” Around age 14, he started to bleed more like a typical severe. So Stacey worked with the HTC to adjust her son’s dosing schedule, and ended up dosing every other day until he switched to extended half-life factor two years ago.

“There’s not a one-size solution for everyone,” Stacey has learned. “Keeping good infusion and bleed logs so you know what schedule works best to prevent bleeding is important.”

Crystal laughs, “I could probably write a book about all the ways my boys ‘differ’ from the typical definition of hemophilia.”

And in a community where boys “typically” have hemophilia while women are carriers, women are now advocating to redefine what it means to have hemophilia. Labels have their place, but when we define hemophilia and determine treatment plans, we sometimes need to look outside the box at hemophilia—and trust the parents and patients when they describe their own uniqueness and needs.