In 2007 I was honored to be invited to Hiroshima, Japan, by Novo Nordisk to speak at a meeting of Japanese hematologists, and later a group of hemophilia patients and families. While in Japan, I was able to visit the A-Bomb Dome, ground zero where the atomic bomb was dropped. I’m a huge history buff, and read voraciously about history of all types, and try to visit as many historical places in the world as I can. Of special interest is World War II. I wondered how many
Americans even remembered the dates when “Fat Man” and “Little Boy” were dropped?

We should. I was thinking of Japan and my visit last week, mainly because it is the anniversary of the bombing of Hiroshima (August 6, 1945) and three days later, Nagasaki (August 9, 2017). Also because for some reason, my visit to Hiroshima is one of the highest hit pages on my blog, consistently every year. I reflected on my memorable trip, and what I saw at the museum in Hiroshima. I planned on running a return visit by reposting my blog, when national events suddenly made it more urgent that I do. 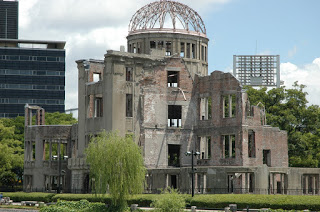 Last week, in between those two infamous dates, President Trump chose to use threatening (yet characteristically vague) rhetoric toward North Korea. Everyone since has been whispering and worrying about nuclear war. Guam is now preparing its inhabitants for a pre-emptive strike. In 2007 I wrote: “Yesterday in Hiroshima, before I gave my presentation, I had time to slip out to the Peace Museum. This expansive, eerily quiet edifice preserves the memory of those killed on August 6, 1945, when the first atomic bomb was used. Inside, Yuko and I read in hushed silence what life was like in Hiroshima the morning the bomb fell, and the devastation that followed. The museum has recovered the actual clothing of some of the children who died in the attack, and most notably several watches, with hands frozen at 8:15 am, when the bomb struck. It was hard to sit through the 30 minute opening film without tears filling our eyes, viewing how the victims suffered. Hiroshima has since become the epicenter of a world peace movement, and every mayor since 1968 has written to world leaders whenever a nuclear weapon is tested, urging them to stop the spread of nuclear weapons. The photo above shows the A-Bomb Dome, now a World Heritage site, which is all that remains of a building near the hypocenter of the blast. It was also about the only thing left standing in the city.”

“Nuclear weapons are incompatible with mankind,” said Yoshitoshi Fukahori, an 88-year-old survivor of the Nagasaki bombing who lost his sister in the blast. He said that as he rushed home the morning after the bombing, the shocking view
from the hilltop — his hometown flattened and the landmark Catholic church on fire — made him cry. (LA Times, August 9, 2017) 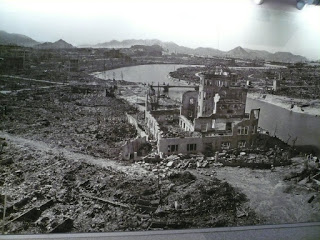 Since the nuclear destruction of their cities, Japan has become one of the most peaceful nations on earth. The entire Japanese culture is based on respect, desire for peace, and abhorrence of nuclear weapons. Careless throwing around of vague threats sets the entire world on edge. I went to Japan to speak about hemophilia, but came home with renewed respect of how Japan suffered, how it changed their national identity, and with amazement at the peaceful culture.
Let’s hope and pray we do not have to suffer such extremes to learn what peace is and means.

Great Book You Must Read

Hiroshima by John Hersey. This book, which I read just in time to honor the 49th anniversary of the August 6 bombing of Hiroshima, is one of those absolutely rare gems: short, full of prose and
thoughtfulness, and leaving a lasting impression. You can read this book in one evening, and probably will because it’s hard to put down. Simply told, powerfully effective and unforgettable. A classic. Five stars.