God, The IRS and Editors 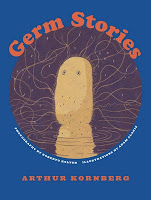 I always joke that these are the authorities to whom I answer, in that order. My editor, Sara, is fantastic. She’s worked with me for 15 or 16 years now, and probably knows as much about hemophilia and VWD as any layperson. She’s the left side of my brain, processing words for me, and after all this time she even knows how I think when I read and write. She is indispensable to my work.

Wish everyone had a Sara for an editor. One of our writers, Richard Atwood, found this little educational book for juveniles, which mentions hemophilia. It also mentioned AIDS, and incredulously, got the acronym wrong! Where were their editors?

Germ Stories, by Arthur Kornberg was published in 2008, and is a brief 72 pages.

Richard writes: “Written for juvenile readers, 10 profiles of what the author termed ‘the little beasties’ or germs were presented. Each germ was identified with its scientific name, its pronunciation, a short definition, and a quick fact, plus was accompanied with one or more colored photographs, a whimsical watercolor drawing, and, most importantly, a rhyming poem that told a story about the germ. The story of HIV mentioned Bill who was in the second grade and had hemophilia. His hemophilia was defined as slow clotting of his blood, and he acquired the AIDS virus from a contaminated blood transfusion. Incredulously, AIDS was listed as an abbreviation for “Acute” Immunodeficiency, rather than the correct term Acquired. There was also no mention that for many years the factor concentrates used for the treatment of hemophilia have been monitored to ensure their safety, and thus are devoid of the AIDS and other viruses.

“Despite the use of both a copy editor and a proof reader, an incorrect name for AIDS was used; all the other, long technical names were used correctly. The mention of hemophilia and AIDS seemed dated, as it would have been appropriate during the 1980s, but not currently. Thus in a quite impressive book meant for children, hemophilia got short shrift. The author is a research enzymologist at Stanford University who won the 1959 Nobel Prize in Medicine for his discoveries with DNA.”

I know, mistakes happen; we’ve made quite a few ourselves, but this one was a whopper. AIDS has only been the greatest scourge of the 20th century, devastating whole generations and continents. I liked Richard’s comment that “as usual” hemophilia gets the short shrift. Imagine in this day and age, hemophilia is still misrepresented! Well, I guess I have a future still in publishing info about hemophilia!

Interesting Novella I Just Read
Who Goes There by John W. Campbell (as Don A. Stuart)

Speaking of editorial issues, this little book is filled with them. I was behind in my goal to read one book a week, so turned to this quickie, which I had heard a lot about. Only 56 pages long, available for free on the Internet, it didn’t take long to read, but ouch, what weak writing! One character was described as 6 foot 4, a “bronze giant,” (meaning he was swarthy? Tanned?) but every reference to him referred to him as a bronze giant, with bronze hands, bronze neck, bronze hair? Bronze beard? Bronze, bronze, bronze. In fact, Campbell used the word five times in one short paragraph. The book strangely references metal all the time: steely nerves, etc. Even the ice axe handle was bronze! The characters were thinly developed and the transitioning from chapter to chapter awkward. The writing was like a college kid making his first attempt at fictional writing.

But here it’s the story that counts, which is great. It’s hard to focus on the story with this writing style, but certainly underneath all the mixed metaphors, repetition and uninspiring use of words is a very good story. Apparently others thought so too. Movie director John Carpenter snatched up this gem and turned it into the 1982, now cult-classic “The Thing,” a terrifying and well-acted movie. Three/five stars.