Hemophilia: The B Sci-Fi Movie

I love sci-fi as a movie genre, and am a big fan of the 1950s classics (War of the Worlds, The Amazing Colossal Man, The Day the Earth Stood Still), and even the silly B-movies (Plan 9 From Outer Space), right up to 2001: A Space Odyssey, Alien (all time greatest) and hey, even Prometheus. I never knew hemophilia was ever mentioned in sci-fi but it has been!

Our esteemed writer Richard Atwood is a sleuth at finding obscure references to hemophilia. And 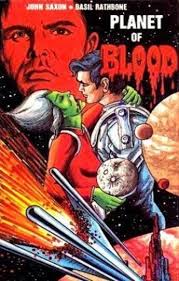 he found one in an old sci-fi film–with some prominent cast members.

The film is the 1966 Planet of Blood (a.k.a. Queen of Blood) and is about a space-vampire who is a queen on her planet. But her spaceship is in trouble; so Dr. Farrady (starring Basil Rathbone) at the International Institute of Space Technology sends two rescue teams of American astronauts (played by Dennis Hopper, Judi Meredith, and John Saxon) travel from the Moon to Mars in 1990 to search for unidentified aliens in distress.

The astronauts locate only one mute, green-skinned, female alien (Florence Marly) in a red-bodysuit, with platinum blood hair, picked up from the Martian satellite Phobos. The alien must live on human plasma, which leads to the deaths of two astronauts who were hypnotized first, while the crew return to Earth. She has a secret plot to overrun the Earth by laying as many eggs as possible on the rescue ship that recovers her from her crashed interstellar spaceship. 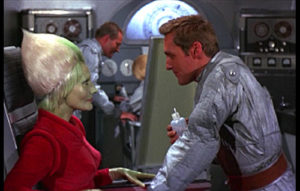 Disdaining human food, however, the alien queen needs human blood to survive. She hypnotizes male crew members, one by one, and sucks them dry. Ordered not to kill her, the surviving astronauts fear for their lives from the killer in their midst. Spoiler alert!! They accidentally end her life by cutting her skin, and she bleeds to death. Her blood is green.

The crew believe that she is what humans would have become if we had evolved on another planet–hemophiliacs.  This female vampire is labeled a hemophiliac, by the crew, and some sort of royalty. She’s dead, but like a queen bee, she leaves behind her red eggs, with “consequences left to the imagination,” Richard writes.

Interesting take on interstellar aliens, vampires, and hemophilia!  It’s now a cult movie, and you can order it on Amazon. 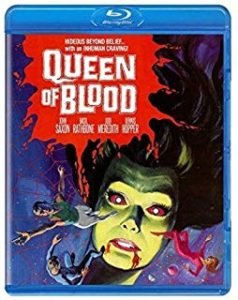