INDIA Day 11 Taking a Train Back in Time 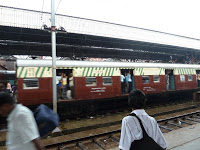 The days in India are flying by in a whirlwind of planes, trains and autos. Usha and I left Durgapur Tuesday afternoon (Day 11) first by car, for a three hour ride back to Calcutta, then by train headed for Bhubaneswar. The Calcutta rail station is immense, a real icon to the British colonial era. Wouldn’t you know, the sky opened up and a monsoon of rain poured down. Everything turned into slushy brown mud. We maneuvered saris, salwar kameezes and four big bags of luggage (with the help of porters!) in the downpour. It was a chaotic scene with thousands of Indians all running about to get tickets and trains, everyone soaked. We couldn’t help but laugh! Little children kept staring at me (big ones too) as I was the lone Westerner among the crowd. Finally we boarded, said good-bye to our dear friend Ujjal Roy, who accompanied us, and then settled in. The train is small, not very clean, and crowded. Our luggage sat in the aisle and I squeezed in the seat with my other luggage, and Usha, for seven hours. At least inside was air-conditioned. Outside was scorching. When we used the restroom, the water from the spigot was scalding! I use the term restroom loosely for it’s anything but restful to use. Often no soap, no paper, and sometimes no toilet! Try that while balancing purse, sari, scarf and yourself as the train lurches.

With every stop, people came and went, and often beggars would board momentarily, looking for money. These are people with no arms, deformed arms, or just children. One beautiful six-year-old boarded and began wiping the filthy floor with his own shirt, pitifully looking up at passengers with palm out, trying to get some money. Sadly, these kids are part of the mafia, which extorts money from them and gets them hooked on drugs to control them.

The train took us through so many rural villages. The scenery leaving Calcutta was one of terrible charcoal-grey slums alongside the tracks, but eventually gave birth to lush rice paddies, palms, red dirt roads, where water buffalo graze and villagers in colorful saris walk with umbrellas to protect from the sun. The sun set on the beautiful India countryside.

We arrived in Bhubaneswar, the City of Temples, around 9 pm, and were warmly greeted by Mr. Chandan, the secretary of the hemophilia chapter here. The mothers had also come, bearing beautiful flowers. We jaunted off to the Crown hotel, an oasis for us after such long and difficult trips. And they have Wi-Fi! (Photo: Usha and I at the Crown. Even at age 57, Usha is stunningly beautiful and no one wears a sari like her!)

On Tuesday we had two family visits: one fairly poor, and the other doing quite well.

Deepak is a 17-year-old, who just started being sponsored through Save One Life. I was excited to meet Deepak to introduce him via video to his sponsor. Deepak is a college student, studying liberal arts, and who eventually wants to be an engineer. He lives in a concrete home with several rooms. The number of rooms, and availability of electricity and plumbing often judge wealth. Deepak bikes to work, despite having severe hemarthrosis in his knees. He is a slightly built young man, soft spoken. Mr. Chandan came with us, as did the president of the society, Dr. G. P. Chootray, a pathologist.

I believe what Mother Theresa once said: “The poor have much to teach us.” I find more civility and hospitality in the homes of the poor than I do in the homes of the wealthy. I have been in the homes of many a millionaire and even more, the homes in slums. It’s in the humblest of homes that they welcome you with open arms, even when I have nothing to bring, offer fresh drinks, in this case a coconut with the top lopped off and a straw inserted. They sit patiently, give you the best seat (often the edge of the sole, flat bed), and put the focus on the guest. I always come away feeling bonded to them. Despite the rain, mud, heat, flies, and usual lack of hygiene, the families we visit are personally clean, carefully dressed, and always an example of civility.

Deepak is doing fairly well but we worry about his weak muscular system; his muscles are quite atrophied and he is painfully thin. We recommend strongly physical therapy to boost the muscles, which will protect his joints, and then keep him in school. Later that evening we would give the society the gift of 30,000 IUs of factor—as much as they were able to purchase from Hemophilia Federation (India) this entire year!

(Photo: Ganesha, the elephant-headed god, is a fixture in many cars) As we drove around Bhubaneswar, I noticed how underdeveloped it is compared to the other major cities. This city is the capital of the state of Orissa, which holds 35 million people. You never, ever get over the sheer number of people you see in India. Swarms, hordes, oceans, wave after wave. And the languages? Over 70 distinct and different languages, and over 1000 dialects! This country is nothing short of a miracle of cooperation and efficiency.

As I was in the City of Temples, I had to visit the oldest temple, the Lingaraj Temple, built more than 1000 years ago for Lord Shiva.

Stunning in appearance. All about and inside the temple were pilgrims, come to pray. And all about were cows! You may know that cows are sacred in India, and in this city especially, one cannot look anywhere without seeing a random cow or bullock. Like the temples, they are part of an exotic and inspiring backdrop of this fascinating country.

Our day ended with a very simple and intimate meeting with the local families. They are respectful, and deeply grateful. I presented a gift of 30,000 IUs of factor, as much as they have had all year. Imagine, 30,000 IUs to be divided among 200! How do you do it? As we chatted with the families, we saw swollen knees and contracted elbows. This chapter, though in existence for 18 years, is a throwback in time. It lags far behind other chapters we have seen, and it shows in the faces and joints of the patients. We are dedicated to empower the patients and to raise this chapter to a higher level, and to inspire more patient leadership. I think the families are ready for this. Usha gave an inspiring speech to the families to get involved, and she has the authority to speak this way as she is former vice president of chapter development for Hemophilia Federation (India) and has a son with hemophilia. She’s a powerful speaker, and quite motivating.

We were touched to receive lovely gifts of hand-embroidered cloths, very typical handiworks of this state. As we drove away in the dark, we felt the families were also in darkness about the possibilities with hemophilia. Save One Life will work to enroll more children, and to help these families have a better future.

(If you would like to sponsor a needy child from Bhubaneswar, please contact Tricia at contact@saveonelife.net today! They truly need your help. Only 66 cents a day can change their lives!)