(Photos: Scenes of Mumbai or Bombay)

Visiting the jhodapattis (slums) on Friday night helped us to prepare for the meeting on Saturday with all the Save One Life beneficiaries. Indira Nair, president of the Mumbai Chapter, picked us up at our hotel, and we set out by “cool cab” (meaning, air-conditioned) to the King Edward Memorial (KEM) Hospital. Indira told me it’s about 15 minutes away but translated from Indian time, this meant about 45 minutes. Traffic is surreal: I feel like a lone foreign protein loose in a throbbing bloodstream of auto rickshaws, cars, trucks, taxis, motorbikes, bikes, scooters and buses that feeds the heart of this ancient city Mumbai. Everything comes slamming to within inches of sudden collision, but miraculously no one is injured. Imagine that we pay for this kind of thrill when we go on roller coaster rides!

At the hospital, a room full of families warmly greet Usha and me. What a lovely reception! They all stood and applauded, Muslims and Hindus, mothers and fathers. We sat at the front of the room, and Balshiram Gadhave, who came with us last night, acted as host and introduced us, thanked us for the funds from Save One Life, which everyone in the room receives quarterly. 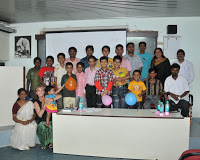 Balshiram gave a magnificent motivational speech. He told us how he grew up in a rural village with no money, and hemophilia. He also suffered from polio and was left partially crippled. He didn’t even have the opportunity that these families have today: factor and support from Save One Life. He said a few years ago he couldn’t even speak English. And now? He not only survived but also is successful, because of his positive attitude. He believes in possibilities, and told the children that they have support, factor and now money, and they can be anything they want to be! When filling out the Save One Life forms, he asks the children what they want to be when they grow up and they say “Scientist!” or “Engineer!” he says yes! You can be whatever you want to be—even though these are children from one room homes earning less than $1 a day. He knows it can be done because in the room were young men who had done it. It was a very inspiring speech.

I was able to see our program in action, as each family today would be receiving their quarterly installment. I said a few words about how much American families care about their children, that we see their poverty and suffering, the difficulty in obtaining factor concentrate, of even surviving day to day. But that we are so proud of them, especially the youth like Javed and Yatish who are going to college and are the future. 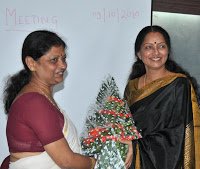 Usha and I were given beautiful bouquets of flowers, and then a big surprise for me: a sari! A bigger surprise: the families wanted to see me wear it. So I was whisked off to a deserted lab room, where I quickly changed into my first sari. Now, saris are probably the most beautiful of all female attire. Every woman, no matter her shape, looks elegant in one. It is made to flatter the female form. However, it takes skill in wearing one so it doesn’t end up around your ankles! Mercifully, my colleagues pinned it to me everywhere so I felt rather propped up. When I re-entered the presentation room, the families exploded into applause, and I appropriately “modeled” it for them. Moments like these erase all differences in who we are. I was reminded of the last words of the classic American book I read on the plane ride over, To Kill a Mockingbird, after Scout says of Tom Robinson, “…he was real nice….” and Atticus replies, “Most people are, Scout, when you finally see them.” Despite our obvious differences in religion, nationality and socioeconomic status, we all can relate to certain basic human experiences—humor and celebration are some of these we all share.

Balshiram announced that we would hand out the money from the Save One Life donors, and each child happily came forward, shook my hand and received their quarterly installment, $60 US. It may not seem like much, but if I told you that you were going to get a month’s salary for free, from some kind benefactor, I am sure it would brighten your day, especially if you had to pay for factor out of pocket. Twenty-four beneficiaries came one by one, beautiful children of India, who did nothing to deserve this disorder, or the economic plight they are in. 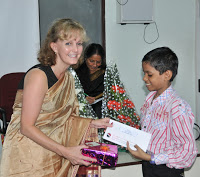 Afterwards, I encouraged the families to speak out and share their experiences as a group. For the last two weeks, Usha and I had spoken to each child individually, which could take up to five solid hours a day. Today, we sadly didn’t have the time. And this was one of our biggest turnouts! Amazingly, the mothers began to speak. While they spoke the children played with colorful balloons I had brought.

They had questions: will there be a cure? How can I get factor? My son needs surgery… some simply said thank you for thinking of them and for giving them support. Their thanks were heartfelt. Usha was especially engaging during this time: she has a natural rapport with families that no one can compete with. She also understands the Indian medical system, each different state, and indeed each chapter as she has had so much experience with Hemophilia Federation (India). And she has compassion galore. Above all, Usha and I were assured today, as in every city we visited, that Save One Life is a) working well, 2) much needed, 3) changing lives for the better.

After the family rap session, lunch was served for the families. We noted that quite a few families came from far away. This has been a constant theme in India: impoverished families will travel up to 12 hours to come to an HTC, all the while trying to manage a child with a painful bleed, and no access to medicine. Usha offered them reimbursement for their travel, including some rupees for their food. Our hearts break when we hear tales like this, but this is exactly the daily living challenge that Save One Life is meant to address.

While they ate, Dr. Ghosh, newly elected president of HFI, and Dr. Devlia Sahu, hematologists at the hospital, joined us, and then gave us a tour of the medical ward. It was filled—and almost all with inhibitor patients. What was going on? There were two, sometimes three patients in each bed, which are only an old metal frame and a thin plastic mattress. No TVs, no games, no room, just endless days of waiting and treatment, and pain. If only you, the reader, could experience this and see this! You would never take anything for granted in your life again. How little these patients, even this hospital, have!

One boy has a CNS bleed, factor IX (very hard to get in India); another two boys whose grandmother kept saying the only words in English she knows, “Three… three..” Three family members who need help. She thrust their x-rays at me, pleading for help. Another man, who looked okay, till he lifted his shirt. His swollen and distended abdomen was loaded with blood, rock hard, which had become tumors, and spread so much they cracked his pelvis. The lovely man, in pain, gave me a Namaste and smiled, and allowed me to take his photo. A little boy with a urinary problem lay naked on a bed, rigged up to cryo. He smiled at me and let me hold his hand. Another with a fracture, another with a head bleed… on and on… it was quite shocking and the needs are great in just this one ward alone.

One case really caught our eye: Suraj, a 16-year-old who came from 12 hours away. I have never seen anyone with hemophilia in all the 24 countries I visited, with such bad joint problems. We took a video of him walking, and he was in obvious deep pain. No crutches, no wheelchairs… they just all endure it like soldiers.

This had been such a joyful and simultaneously sobering visit. But the overall theme was gratitude. They are so grateful to their American sponsors, and we were so grateful to the Mumbai Chapter for providing such a meaningful visit in such a short time. Only 24 hours in Mumbai and I feel like my soul has been branded forever with their pain and perseverance. As always, “The poor have much to teach us.” Indeed, even though I am now home, hemophilia patients from India keep invading my dreams.

Before we returned to the hotel to pack up, we visited the Mumbai Chapter’s office. It was a short walk from the hospital, and was clean, spacious, filled with materials. We had some of that great Indian tea (I will miss this a lot!), despite the heat of the day. Indira and her team showed us their spreadsheets and how meticulously they maintain Save One Life records. Usha and I were so impressed. We could see that this is how the program is meant to run, and yet, just last year, Mumbai was not running the program as well as we had hoped. Patients didn’t know the money came from US sponsors; things were not being communicated. Now, Mumbai emerges as one of our best program partners.

As we joked, Balshiram pointed out the security camera in the corner, a very rare luxury, to monitor the factor supplies. I joked that I thought this was their security camera, and I pointed to the wall photo of Ashok Verma, founder of HFI, who passed away in 2004. We all laughed, and felt that Ashok would be proud of us all today, to implement a program that directly and immediately touches the lives of the poorest with hemophilia in India, a program that saves lives.

(Photos: Mumbai Chapter team members; scenes near KEM Hospital; the swastika in this form is an ancient Hindu symbol)

Usha and I had a bittersweet good bye at the airport: it may not be easy to spend two and a half weeks with another person, almost 24 hours a day, but we not only did it but enjoyed it. I hope it’s the first of many such trips. Usha wisely noted: when the compassion is there, dedication and a common mission, there is no room for differences, quarrels, disparity or problems. We are forward looking always, to help these children have opportunities to not only live but to thrive. 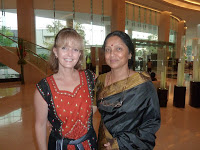 We have children from India in need of your help now. Would you like to sponsor a child? Please visit www.saveonelife.net or write to Tricia at contact@saveonelife.net to learn more. Only 66 cents a day can truly change the life of a child with hemophilia in India—I have seen this with my own eyes this time.