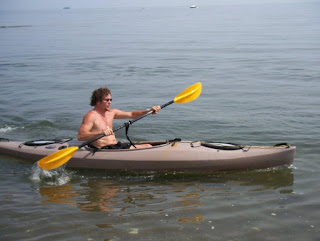 Last week I brought you the exciting conclusion of Barry Haarde’s amazing Ride Across America to raise money for Save One Life, on a bicycle. Very successful and Barry celebrated promptly by going out the next day (and the next) to cycle 12 more miles each day in two more states!

Just two days later, the wonderful Jeff Browning kayaked across Long Island Sound! Jeff also has hemophilia, is age 49, and I mean, between him and Barry you haven’t seen such ripped bodies since Baywatch. What is it with these guys–hemophilia on steroids?

Nope. Just a passion to excel, be their best and to give back. Barry raised about $33,000 for Save One Life. 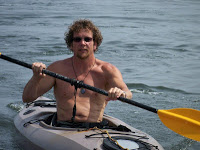 Jeff raised funds for the Connecticut Hemophilia Society (www.cthemophilia.org), a relative newcomer to the US hemophilia scene, but founded by people I know well, respect a lot, and who put their heart and soul into helping those in the small state of Connecticut.

Congratulations, Jeff, on mission accomplished! Kayaking, cycling, by land and by sea; don’t forget Chris Bombadier from Colorado, first guy with hemophilia to summit Mt. Kilimanjaro in 2012, and Jeff Salantai, second guy with hemophilia to summit Kili also in 2012. In fact, Jeff just summited Pico Duarter in the Dominican Republic, tallest peak in the Caribbean, to raise money for Save One Life! I haven’t even had a chance to chat with him yet…

Published in 1989, some of the tenets might seem a bit dated, but DePree, CEO of a major furniture business, shares what were at the time unusual insights into leadership, which now may even seem standard. Empower your employees; let them in on the decision-making process; discover their talents and let them use those; a contractual relationship is a given in the workplace but focus on the covenant–the relationship between two people; look to the employees to see if leadership is successful. Relationships count more than structure; the stress is on servant leadership, and clearly defined vision. A quick read, you can finish in one night and come away with more opened eyes. Definitely worth a read! Three/five stars.