(see update in red below!)

Anyone
who knows me, knows I don’t swear. Really. Went through childbirth three times,
twice without anesthesia, and not a foul word passed my clenched teeth. (See translation
for “WTH” below.) But when I read a recent decision by a payer, I was tempted
to let loose.

Novitas
is a Medicare administrative contractor for two jurisdictions: 1) AR, CO, NM, OK, TX, LA, MS and 2) PA,
DC, MD, DE, NJ, and parts of northern VA. That’s a lot of people impacted by their decisions. Remember I’ve been
warning you and warning you, since 2005 to be exact, that payers would be exerting more infleunce over our treatment? You do remember the “Coming Storm”
article, yes?
Well,
it’s happening. And the community has been vigilantly safeguarding our right to
access to therapies and treatment. First payers got in on the specialty
pharmacy gig. Cigna, Aetna… they all started forming their own specialty
pharmacies and could legally force you to switch to use theirs. That was a game
changer.
Next,
treatment changes. So many HTC people told me this wouldn’t, couldn’t, mustn’t
happen. How could a payer, an insurance company, have a say in what a physician
prescribes?
Wake up. Novitas has mandated in
those jurisdictions above that if patients use NovoSeven RT® (to treat their inhibitor)
they must infuse under the direct supervision of a physician. Like, in his office! And NovoSeven usually requires every
two hour doses to resolve a bleed.
This decision is called “local
coverage determination (LCD)” and it is troubling:  Novitas writes “Factor VIIa
… is indicated for the treatment of bleeding episodes in hemophilia A or B
patients or with acquired hemophilia. NovoSeven, as noted in the Prescribing
Information for the product, should be administered to patients only under the
supervision of a physician experienced in the treatment of hemophilia. Novitas
notes this product would not be appropriate to be used in a self-administration
situation and the supervision should be ‘direct’ as in ‘incident to’ in an
office under Part B Medicare.”
Uh oh. As noted in the Prescribing Information? True. The Novo Nordisk
PI that comes with the product does say “Administer NovoSeven RT to
patients only under the supervision of a physician experienced in the treatment
of bleeding disorders.” Yikes. It’s not what we meant to say! But Novitas is
taking us literally, so yeah, they do have a case there.
But, according to the Social Security
Act, Medicare allows for hemophilia patients deemed competent to administer at
home. Without medical supervisions. Like, the way we have been doing it for
years. And it doesn’t say everyone except
NovoSeven users. So Novitas, yeah, you are restricting treatment against what the federal government allows.
And NHF’s MASAC recommendation #227
specifically says patients should always keep doses on hand for emergencies
(like, at home).
So what’s a manufacturer, pharmacist, or patient to do?
Well, Barb Forss of Washington figured that
one out. She’s a severe FVII deficient patient who self-infuses NovoSeven RT
daily for prophylaxis, and every 3 hours for a bleed, until it’s resolved.
She’s been using this product for over 14 years.  Is she supposed to
go to her HTC every time she needs treatment? She would have to move in with
her HTC team whenever she as a bleed. I hope they have a nice room with a view for
her there.
But Barb doesn’t want a new apartment in a
hospital. She wrote to Novitas, and said, “I went undiagnosed for 47 years. I
was hospitalized over 50 times and tethered to an infusion pole for days and
sometimes even weeks.  If they threw enough [fresh frozen plasma] at me, I
would eventually stop bleeding, then sometimes start again after being released
from hospital.  You can’t imagine how the quality of my life has improved
being able to self-infuse my NovoSeven and avoid hospitalization from bleeding
for the first time in my life.” She adds: “If this decision were to come down
in WA state when I’m on Medicare next year, that would mean I would need to
drive 220 miles roundtrip, daily, just for my prophy infusion at my HTC in
Seattle.  And I suppose just bring an overnight bag and camp out at my HTC
for the duration of any internal bleeds so that I could be monitored by my
doctor, right?”
I think Barb is close to swearing.
In case Novitas still doesn’t get it, she
adds:  “Please reconsider this determination.  Every patient I know
who uses NovoSeven can self-infuse blindfolded, it’s as easy as pie and does
not require a doctor to be there.”
And
Novo Nordisk wrote in as well, asking to change the PI text to  “Initiate treatment with NovoSeven RT
under the supervision of a qualified healthcare professional experienced in the
treatment of bleeding disorders.” Then the patient can take over (like we always
do).
I
know the Hemophilia Alliance, NHF and HFA are all mobilizing to get this
rescinded.
But
time is running out. This decision took effect April 9. Barb tells me there is
a 45-day response window. We need to let Novitas know this is not a good
decision, and must be rolled back.
Noviats does allow you to challenge the decision,
but only individually: “If changes or revisions to the policy are to be
considered, you must submit a LCD Reconsideration request which can be found on
our website at:  http://www.novitas-solutions.com/webcenter/spaces/MedicareJL/page/pagebyid?contentId=00007706.  This process is a mechanism for interested parties to
request a revision to an LCD.  Requests must be submitted in writing, and
must identify the language that the requestor wants added to or deleted from an
LCD. Requests must include a justification supported by new evidence, which may
materially affect the LCD’s content or basis.”
Blah. Lots of words and work. But we will do
it, until our community rolls it back. Hey, if we can get ABC to eat their
words about hemophilia being a result of inbreeding, and have them redo a sitcom,
surely we can get Novitas to change this horrible decision.
Ironically, in the signature of the email of
the Novitas CMD Research Analyst, Medical Affairs, who is responding to the
community, is this thoughtful little quotation:
“It is not what you do for your
children, but what you have taught them to do for themselves, that will make
them successful.” –Ann Landers 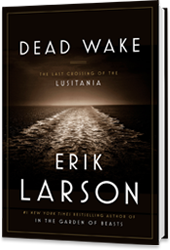 Dead Wake: The Last Crossing of the Lusitania
Erik Larson [Kindle]
Larson is one of America’s best historical storytellers and his latest
book, on the 100th anniversary of the sinking of “Lucy” on May 7, 1915,
is fantastic. He deftly weaves together WWI history, politics, engineering of
these empresses of the sea, and personal stories of individuals on board. A
tragic tale, Larsen shows how plenty of intel was available that could have prevented
the sinking of Cunard’s masterpiece by a single torpedo from U-20 and the
deaths of over 1,700 people. Still, no one would believe that Germany could
fire upon a passenger ship. Contrary to popular belief, the sinking did not
bring the US into the war, not right away. Another 2 years would pass. Five/five
stars.

UPDATE 5.12.15 from NHF: “NHF is aware of the Medicare contractor, Novitas’ new local coverage determination on clotting factor coverage and its policy that patients infusing NovoSeven may not self-infuse in the home.  NHF staff, joined by HTC Medical Directors from LA and PA have spoken with Novitas’ Medical Director about our concerns with this policy and have provided Novitas with requested literature on this subject.  In addition, MASAC, at its last meeting passed a resolution recommending that self-infusion of inhibitor treatments is the current standard of care.  This information will also be sent to Novitas.

We suggest that patients on Medicare living in states under Novitas’ jurisdiction, who are on NovoSeven talk to their HTC about the impact of this policy on their care.  Together with the HTCs, patients can determine whether there is a need to contact Novitas. “

1 thought on “One Giant Leap Backward for Treatment: Novitas, WTH?*”