The Other Prince With Hemophilia

When we think of a prince with hemophilia, we almost always think about Alexis, the Russian heir to the throne, who was murdered on August 17, 1918. But there were others. The first prince with hemophilia that we know of historically was Leopold, youngest son of Queen Victoria, youngest of nine children. His birth was remarkable becasue he was delivered with the aid of chloroform, administered by one of my personal heroes, Dr. John Snow, who also cracked the msytery of cholera in 1854 in London, during a savage outbreak, and pretty much launched the science of epidemiology and public health.

But back to Leopold!

My friend Richard Atwood sent me this poem about Leopold, published in the 1800s. 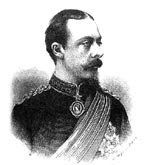 THE DEATH OF PRINCE LEOPOLD

ALAS! noble Prince Leopold, he is dead!
Who often has his luster shed:
Especially by singing for the benefit of Esher School,-
Which proves he was a wise prince, and no conceited fool.

Methinks I see him on the platform singing the Sands o’ Dee,
The generous-hearted Leopold, the good and the free,
Who was manly in his actions, and beloved by his mother;
And in all the family she hasn’t got such another.

He was of delicate constitution all his life,
And he was his mother’s favorite, and very kind to his wife,
And he had also a particular liking for his child,
And in his behaviour he was very mild.

Oh! noble-hearted Leopold, most beautiful to see,
Who was wont to fill your audience’s hearts with glee,
With your charming songs, and lectures against strong drink:
Britain had nothing else to fear, as far as you could think.

A wise prince you were, and well worthy of the name,
And to write in praise of thee I cannot refrain;
Because you were ever ready to defend that which is right,
Both pleasing and righteous in God’s eye-sight.

And for the loss of such a prince the people will mourn,
But, alas! unto them he can never more return,
Because sorrow never could revive the dead again,
Therefore to weep for him is all in vain.

‘Twas on Saturday the 12th of April, in the year 1884,
He was buried in the royal vault, never to rise more
Until the last trump shall sound to summon him away.

When the Duchess of Albany arrived she drove through the Royal Arch,-
A little before the Seaforth Highlanders set out on the funeral march;
And she was received with every sympathetic respect,
Which none of the people present seem’d to neglect.

Then she entered the memorial chapel and stayed a short time
And as she viewed her husband’s remains it was really sublime,
While her tears fell fast on the coffin lid without delay,
Then she took one last fond look, and hurried away.

At half-past ten o’clock the Seaforth Highlanders did appear,
And every man in the detachment his medals did wear;
And they carried their side-arms by their side,
With mournful looks, but full of love and pride.

Then came the Coldstream Guards headed by their band,
Which made the scene appear imposing and grand;
Then the musicians drew up in front of the guardroom,
And waited patiently to see the prince laid in the royal tomb.

First in the procession were the servants of His late Royal Highness,
And next came the servants of the Queen in deep mourning dress,
And the gentlemen of his household in deep distress,
Also General Du Pia, who accompanied the remains from Cannes.

The coffin was borne by eight Highlanders of his own regiment,
And the fellows seemed to be rather discontent
For the loss of the prince they loved most dear,
While adown their cheeks stole many a silent tear.

Then behind the corpse came the Prince of Wales in field marshal uniform,
Looking very pale, dejected, careworn, and forlorn;
Then followed great magnates, all dressed in uniform,
And last, but not least, the noble Marquis of Lorne.

The scene in George’s Chapel was most magnificent to behold,
The banners of the knights of the garter embroidered with gold;
Then again it was most touching and lovely to see
The Seaforth Highlanders’ inscription to the Prince’s memory:

It was wrought in violets, upon a background of white flowers,
And as they gazed upon it their tears fell in showers;
But the whole assembly were hushed when Her Majesty did appear,
Attired in her deepest mourning, and from her eye there fell a tear.

Her Majesty was unable to stand long, she was overcome with grieff,
And when the Highlanders lowered the coffin into the tomb she felt relief;
Then the ceremony closed with singing “Lead, kindly light,”
Then the Queen withdrew in haste from the mournful sight.

Then the Seaforth Highlanders’ band played “Lochaber no more,”
While the brave soldiers’ hearts felt depressed and sore;
And as homeward they marched they let fall many a tear
For the loss of the virtues Prince Leopold they loved so dear. (pp. 89-93).

This poem was found in Colin S.K. Walker’s (Editor) 1993 book William McGonagall: A Selection. (Edinburgh, Scotland: Birlinn Ltd.). William McGonagall, who was born in 1825 in Edinburgh, published three collections of verses, and died in 1902. McGonagall may be the most mocked Scottish poet. As the editor explained: “McGonagall’s poetry is undeniably dreadful, always sinking to new depths, just when you think you have hit rock bottom. It is this inimitable multi-faceted awfulness which makes his work memorably funny.” Ouch!

Yeah, it is a pretty bad poem! To get a sense of what Leopold’s life might have been like, watch the movie “Young Victoria,” which just came out earlier this year. Lovely film about the 18-year-old who became queen of the most powerful nation on earth, who bore nine children, one with hemophilia, and who is still famed as England’s longest reigning monarch and one of the most beloved.

This is the fastest read ever: one hour. It’s a book about marketing, especially marketing yourself. The book itself is a marketing masterpiece, which makes it quite fun to read. Read it, pick up a few tips for your business, your nonprofit or your job hunting skills, and enjoy! Two stars.

PrevPreviousHealth Care Reform: Pulse On The Road
NextHemophilia as Reason Not to Do Forcible Blood Draw by PoliceNext