Out of Silence: Leadership

922
My last two blogs focused on leadership, and two beloved leaders who have passed, much too soon, from this life. I have spent this week with another amazing leader, very much still with us: Eduardo Strauch, a survivor of the 1972 plane crash in the Andes, of “Alive” fame.

You may know the incredible story, dubbed “The Miracle of the Andes.” On October 13, 1972, Uruguayan Air Force Flight 571 crashed at 11,710 ft in the inhospitable Andes, while bringing 19 young members of a rugby team, and their families and friends, to neighboring Chile. Thus began perhaps one of the greatest survival stories known. Amazingly, 33 of the 45 on board survived the initial crash, some with injuries that would later claim their lives. And 72 days later, 14 were rescued after two more of the survivors walked out of the Andes for 10 days to find help.

It was a miracle anyone survived. Due to pilot error, the plane descended too early in dense cloud cover, and struck a mountaintop. The right wing snapped off, flipped and severed the tail, then the left wing sheared off. What remained of the fuselage tobogganed down a steep slope and smashed into a mound on a glacier, traveling top speed. Stunned, many in agony from wounds and shock, wearing only street clothes, the survivors sprang into action, displaying heroic teamwork. What happens to us personally, when we are hit with an unexpected tragedy, say, like giving birth to a beautiful child, only to learn he has a life-long, life-threatening bleeding disorder? We can collapse and give up; we can grieve endlessly; we can become dependent on others for help; or we can take action to improve our lives and those of our loved ones. The Andes boys took immediate action, even though many of them were wounded. They helped one another, they organized whatever they had, they started planning. They survived. I journeyed this past week to the crash site, high in the Andes, accessible only by hiking or horseback, to pay my profound respect to those who perished. They are buried in a mass grave on a ridge near the crash site. There is also a makeshift memorial, with an iron cross, upon which people leave personal mementos. This story has touched millions of lives throughout the last 50 years, and only a few get to come here, to the “Valley of Tears,” to see the place where so much agony, sorrow, terror, solitude, struggle and leadership took place.This was my third trip to high camp in the Andes, and my second trip to the crash site. Eduardo has accompanied us each time, and tells me that we are good friends now, and I hope so. He is truly a hero of mine. His story has inspired me to be stronger, to live, to love. And I hope to be a better leader, of my career, my life and myself. On January 1 many of us make New Year Resolutions by setting goals, which is a hallmark of leadership. Eduardo had goals each day to just survive one more day. At night, he focused on the Exit sign of the fuselage, which strangely was the only thing that still operated. Exit… to escape. To be rescued. To be back home. His focus on that daily became his main goal. Eduardo had a lot of time to think during his 72 days on the mountain. He found that he loved the solitude, even during his suffering. Indeed this trip brings us to such a remote place, we had no internet access for four days. We realized at night around the campfire that we didn’t know what was happening in the world. It gave us hours and days to be in the moment, to think, contemplate, look deep inside. What does this trip mean to us? Why do we feel so compelled to come here? What will our lives be? Chris, age 25 and one of our fellow travelers, said to me while riding our horses to the crash site, “This trip is life-changing.” He’s right. In his memoir, “Out of the Silence,” Eduardo writes:

“Everything that happens to us happens within us.”

“It is only in silence, and in the tension of that silence, that we can start to look inside.”

“Something beyond us protects us, and it is found in solitude . . . in observation . . . and in silence.”

Find time for that silence, so that you can reflect and think about your life. Do you have goals? Do you feel like a leader? Have you used any tragedies, or life experiences, to make you stronger? 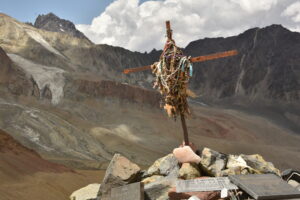 To survive, the Andes boys had to eat human flesh; Eduardo states in his book that this made them “Blood Brothers.” How often do we use that phrase in our hemophilia community! I know many people in our community have risen above their hemophilia, to enhance their life. Check out L.A. Aguayo.  He has turned obstacle after obstacle, heartache and mental collapse, into success. He shows leadership and is a goal-setting expert. He just published his memoirs, called, “Adversity = Opportuniy: Finding purpose in the pain.” I look to the story of the Andes survivors each year to give me strength, hope and inspiration. Read the books about it and you will too. Eduardo is a leadership expert, since he was resurrected 50 years ago from a living hell, and never lost his hope:

“Although nothing is certain, anything is possible.”

Hear Eduardo speak about his experience:

1 thought on “Out of Silence: Leadership”