Searching for a Stone and Unexpected Luck 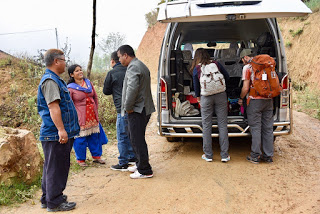 This was easily our best day in Nepal, packed
with adventure, home visits and a deep appreciation of Nepal, its people and
the Nepal Hemophilia Society. Manil showed up with two vans: the production
team of Believe Ltd—Patrick James Lynch (director), David Beede (sound), Josh
Bragg (video) and Rob Bradford (photography)—pile onto one van, but first, they
tape a GoPro to the front of the van to capture the frantic, physics-defying
Kathmandu traffic. Chris, Jess, Manil and I get into the other van and off we
go. We leave the capital area and venture into the countryside, where the urban
concrete jungle turns to trees and farms, cattle and hay. We’re on our way to
see Bibesh, a 19-year-old with hemophilia and a beneficiary of Save One Life. It
rained last night and while creeping uphill on a dirt road, our van gets stuck
in a muddy washout. The production vans zips by while the guys laugh at us and
disappear around a hill. We all have to get out. We grab our bags and the bags
with gifts and start to walk. Around the hill? The production van, also stuck. 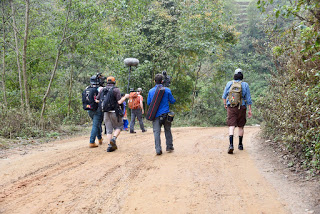 Manil tells us it’s about a half hour walk to
Bibesh’s home. The guys are carrying in total about 130 pounds of equipment:
cameras, batteries, cases, microphones. Josh props his enormous video camera on
his shoulder practically the entire walk. As we walk, the Believe crew
interview Chris and Mani. Jess and I hang together as we walk. The road is
thick with mud, and luckily we are all wearing our hiking boots. But it’s
pleasant: the air is moist and refreshing, and the view is stunning. Tilled,
green hills, brick cottages, cows. The valley stretches before us, decorated
with trees and crops. Somewhere far away we can hear music, and strangely, a
cuckoo! 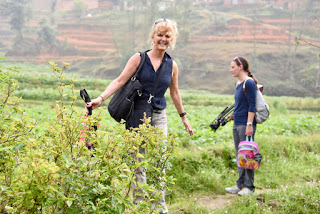 Now we walk down a hill, slipping in the mud.
It’s here that Mani tells us he will need to wait while we go on. He is
limping, and his arm is in a sling. I’m sure he must feel pain but he doesn’t
complain. After we slip down the hill, we stroll out
into a huge green field, following a trail. We’re in the middle of nowhere it
seems as the village we just went through recedes. Down the trail, we have to
cross a stream, and the only means is to balance on a plank. Yes, a plank!
Patrick goes first, then me, then Jess, who clowns around. Then up a hill, very
steep, and it leaves us huffing and sweating. We come to a cottage, but it’s
not Bibesh’s so on we go. It’s getting to be surreal, that this young man has
to overcome roots, vines, mud, hills and a very long walk, just to get to a
bus, that would then take him another hour to get to the hospital to treat a
bleed. And none of them complain, or curse their fate. Ever. They hope—hope
that we can help them, and they ask. But they don’t demand, argue or get
vengeful. 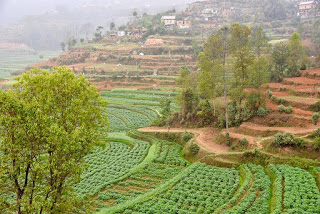 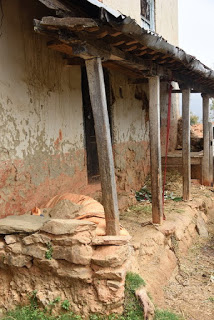 At last we reach Bibesh’s home, high on the
hill. It’s made of brick, but has obvious cracks in it from the earthquake. The
porch is propped up with poles. All around is dusty earth. In fact, they don’t
live in the house but live in a shed, and are building another home up another
hill. The guys get their cameras and sound gear ready. Bibesh is 19, and
actually just had a birthday yesterday. His mother Uma is present, and his
81-year-old grandmother, Bed Kumari, who is as frail as a little sparrow, with
deep set eyes, skin the texture of leather, with many deep creases. Her face is
remarkable, and I photograph her. The lines are like chapters in a book, and
she has a long, amazing story to tell, if only she could. We have a shocking
moment when the great-grandmother appears! She’s a bit wild, with grizzly hair,
missing teeth, rail-thin body, and darting eyes. She speaks in Nepalese very
loudly, and the family motions that she’s hard of hearing. We all get a kick
out of her. 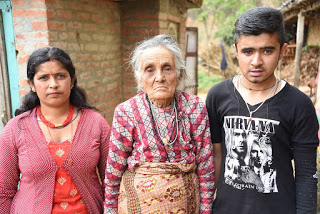 The family is very poor. The father works in
a shop, and earns about $180 a month. The sponsorship he gets through Save One
Life is $24, so it definitely helps. They own their home, which is good, but it
is in bad shape now. 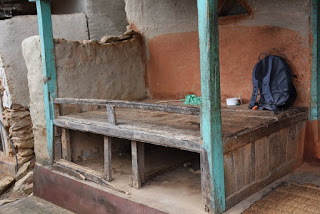 Bibesh himself is a handsome young man, well
dressed and soft-spoken. He speaks English pretty well. He gives us a tour of
the property. We go inside the condemned house, which is more narrow inside
than it looks. We have to duck; the stairs are creaky and threaten to give out.
It’s dusty and damp, with a concrete floor, no screens in the windows. Chris
goes upstairs where the bedrooms are, and Bibesh shows us how the main beams in
the house split under the stress of the quake. Cracks appeared in many of the
bricks too. Outside, we take a short trip up the hill some more and see the new
house under construction. While they use bricks, the mortar seems inadequate to
keep the bricks together. The family is proud to show us a beautiful brick
temple they are also building.
The mother kindly brings out refreshments,
and as I take one with my hand I burn it—ouch, I shout! Hot tea! 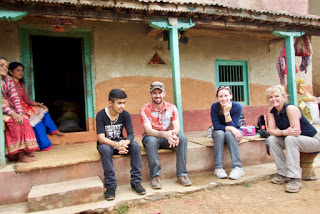 Later, I sit near the grandmother, who
watches me, and we hug and she nestles into my arms. She is so thin—you can
feel all her spine and shoulder bones. Such a lovely old woman. I wonder what
she makes of all this: cameras, strangers, interviews. 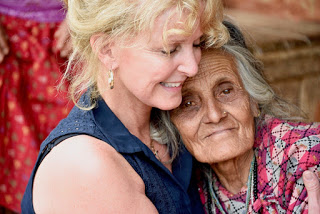 When we leave, Josh gets the drone ready to
take aerial photography. It sounds like a huge bee buzzing overhead. Going down
the hill proves to be just as challenging as going up. We slip and slide our
way down the hill, back to the stream. Chris and Bibesh chat as they descend,
with Josh filming. 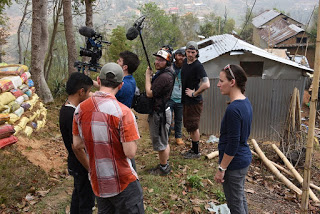 Manil waits for us by the roadside; on to the
next home! 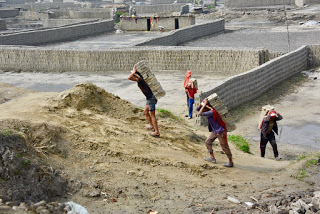 It’s a one hour ride to see Om Krishna, a
17-year-old. We stare out the window and see miles and miles of concrete
bricks. Made right from the mud, the bricks are formed, stacked and then
carried on the backs of men, to make long walls of stacked bricks to be sold. 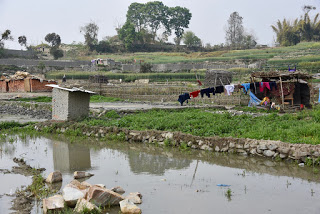 Beyond the brick-making farms, we approach Om
Krishna’s town. The neighborhood is pretty, with some big homes. Om Krishna’s
home is also big, but uninhabitable—earthquake. The family moved from it into a
shed, something we would use to store gardening tools. It really seems wrong
that they should be living there, especially so long after the quake. Not only
does the whole family turn out but the whole neighborhood! Children spring from
nowhere and smile shyly and hide behind adults. Patrick and team waste no time but get right
to work setting up the equipment and proper places to film.
While they interview, I hang out with the
adorable little cousins. Jess and I brought school supplies from Colorado, and
puzzles and punching balls donated from the New England Hemophilia Association.
These were all big hits! Om Krishna is a handsome young man, who speaks English
almost perfectly. He’s a good student. He confides in me after the interview
that he worries about continuing school, as his father is a driver and doesn’t
earn much. 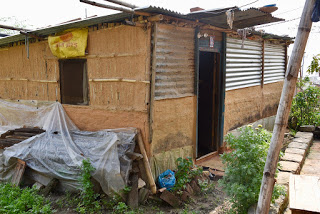 One thing Om Krishna is rich in is family.
It’s obvious he is surrounded by love: a beautiful, elegant mother, who,
despite their struggling status, walks with dignity and grace, her sari gently
flowing. She beams at her son. So does the grandmother, with a face etched with
years but with a warm smile for this special young man. 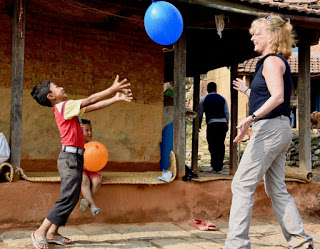 Sadly, Om Krishna’s little brother died of an
untreated gastrointestinal bleed. He still has a hard time talking about it.
This is difficult in some cultures. When you have one child with a disability,
it’s considered unfortunate. Two? That’s a curse. The family could risk being
ostracized from the neighbors for something like this.

After our visit and interview we pile back
into the vans and head to the last house of the day: the Rajbchak
family. After another hour long drive (poor Jess kept feeling car sick), we
arrived, and pulled up alongside a roadside shop I know well. Behind the front
counter was Jagatman (age 26), a Save One Life success story. Jagatman owns
his own mobile repair shop, after receiving training funded by Save One Life,
and then a microenterprise grant. 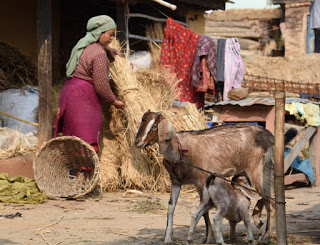 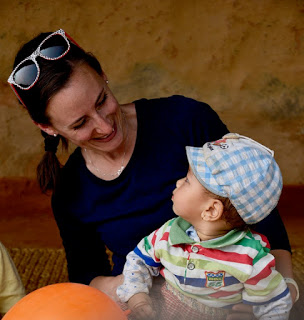 When I stepped out of the van and up to his shop, he smiled broadly
and we both said namaste. He looks great! Confident, strong, which is
remarkable as he has an artificial leg, also a gift from Project SHARE. The
shop is perched at a cross roads and has an open front that displays watches,
toys, picture frames and candy. Soon his brother Jagatlal, who goes by the
nickname “Monsoon,” appeared. We hugged each other (after all, we are friends on Facebook now). Monsoon speaks English fluently and translated for us.
Again, Patrick and the Believe team got right to work and right there, in the
middle of the street, after pulling up chairs, began interviewing Jagatman. A
crowd gathered. Patrick asks excellent questions and gently guided Jagatman and
Monsoon through what is it like to have hemophilia in a developing country. 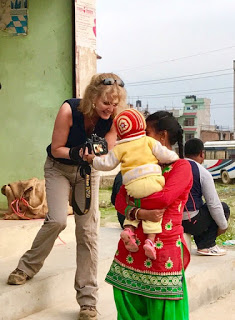 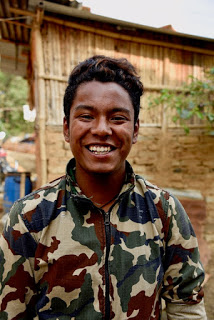 Because the shop is in a prime place, a bus stop, there was all kinds
of noises emanating from the street: motorbikes, cars and a really loud three
wheeled motorcycle that had metal pipes on it that obviously rattled and banged
each other while it took the corner near the shop. Patrick almost packed it in
then! 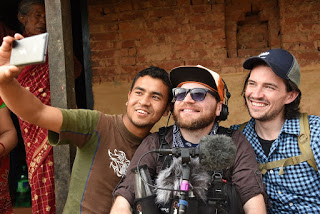 After the interview, we walked down the streets, with Josh, Rob and
Dave filming. Somewhere electronic music from a dance club was playing, so
loud! It’s a wonder they could even film. 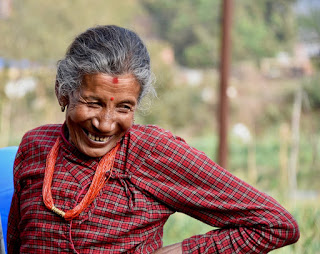 The boys’ house was completely destroyed in the quake. It’s now just a
pile of bricks. The family lives across the street in a shed as well, much
bigger than the others I saw. Outside the entrance of the shed, the boys’
mother waits, ready to offer us hot tea. So nice! We filmed it all and finally
had to call it a night. It was pitch black now, and we still had an hour ride
ahead to get back to the Shanker Hotel. 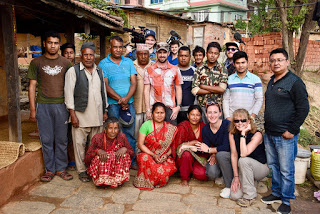 Going back to the street corner
store, we said goodbye to Jagatman. The boys’ father bought a fresh yogurt
drink from the store next door. It was refreshingly delicious. The Nepalese hospitality
and civility never fail to amaze me. Here’s a family with two boys with
hemophilia, one who lost his leg, and a family that lost it’s entire house, and
they are buying us yogurt drinks!

We are
thoroughly exhausted when we drive back. Jess is the first to fall asleep in
the van, then Chris. It’s emotionally draining to visit, view and hear the
stories of loss, and wonder how these families find the faith, will and
reserves to continue.
But I got
one piece of good news that day: the 4 million IU donation of factor just got an
upgrade. 5 million IU, the largest single donation in Nepal’s history. Thank you
Octapharma. Just made my night. 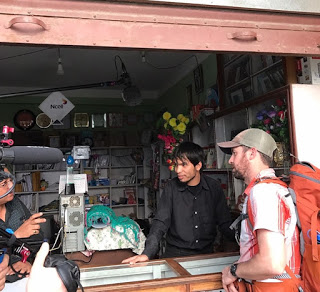 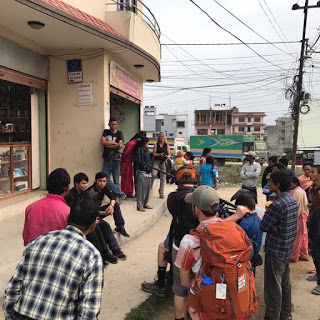 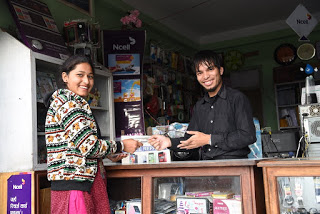 “To find god while searching for a stone.” This Nepalese proverb is used to describe unexpected luck.

PrevPreviousAim to Fly and Touch the Moon
NextStart of Our Trek! April 2-6, 2017Next