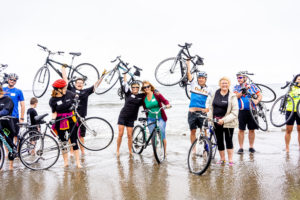 On Friday I went for a 32-mile bike ride, on my usual route that winds through back roads of the north shore of Massachusetts, out to Plum Island to the ocean. It’s a ride I did with Barry Haarde twice, and I thought of how he pushed me into cycling longer than my usual 12 miles, and faster than my usual 13 mph. I actually clocked myself at 15.7 mph. Not bad for age 60.

Last Sunday, August 12, we gathered on a different beach, Odiorne Point in New Hampshire, to remember Barry and his amazing contributions to our community and in particular to the nonprofit I founded, Save One Life. About 50 people from all over the country: California, Connecticut, Denver, Texas, Washington DC and Barry’s family from Florida, trooped in with bicycles to recreate the last 10 miles of his first cross-country journey.

Martha Hopewell, executive director of Save One Life, gave a deeply stirring speech that highlighted Barry’s achievements and impact:

“It was just seven years ago, on this very same day, we celebrated Barry’s first ride across the US at Laurie’s house. We toasted his 3,667 miles and had no clue, at that time, that he would ride 16,728 more or, for that matter, raise over $250,000 for Save One Life!

“Barry’s accomplishment comes after much physical hardship. Barry contracted HIV in the 1980s from contaminated blood products used to treat his severe hemophilia. He also contracted hepatitis C, which required four years of grueling interferon treatments, during which he almost lost his life.” Barry didn’t publicly reveal his HIV status until 2008. “Once Barry made that courageous choice, however, he has been an increasingly vocal advocate for the hemophilia and HIV communities ever since.”

“When Barry undertook his first tour in 2012, he rode for 50 days through ten states and Canada. In addition to raising funds to help needy children, you all know that each day he rode in memory of family and friends lost to AIDS. When Barry finally dipped his wheel in the Atlantic after his first comment was, “Let’s do it again next year!” “And so he did, with the team at Save One Life, his employers at Hewlett Packard and many supporters encouraging him as he overcame physical and psychological barriers to make history. Barry’s goal was to ride through every state. He didn’t quite make it, but his Wheels for the World rides got him to 37 of them…not bad at all!” “We celebrate Barry today. We will forever cherish his enthusiasm for riding and his passion for his blood brothers and sisters around the world. He is here with us at this very special memorial. God bless Barry, and all those in whose hearts you will always live.”

We lost Barry in February. Not everyone knows this, but he took his own life. Despite his beloved status in our community, his fame, with years still ahead of him, he could not outride the darkness that dogged him. Teddy Roosevelt, one of our most accomplished of presidents, and an athlete in his own right, suffered from depression, and wrote, “Black care rarely sits behind a rider whose pace is fast enough.” Barry once told me, “Endurance athletes like me aren’t always heading towards a goal; we’re often running away from something.”

As I rode back from Plum Island on Friday, I could vividly see in my mind Barry ahead of me, his lanky figure balanced on his carbon-framed steed, his left hand shooting our and pointing downward each time we neared a pothole or a crack in the asphalt. His way of warning me of danger ahead. I thought, maybe his legacy is not so much how much money he raised, but of the need to be aware of our community’s potholes and cracks—the mental health issues, particularly depression, that lurk insidiously in our community. I hope addressing these becomes Barry’s true legacy. 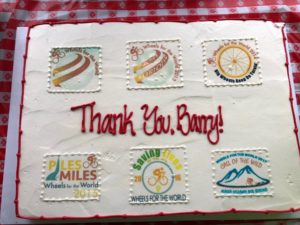 Read the press release about the even August 12. Link here https://www.prweb.com/releases/cyclist_barry_haarde_honored_for_his_legacy/prweb15699984.htm

Thanks to our co-host, New England Hemophilia Association, to board members Ujjwal Bhattarai and family, Myrish Antonio and husband Jojo, Chris Bombardier and wife Jessica for attending, to our staff at Save One Life (Martha, Jodi Kristy), to all of Barry’s dear friends who attended, and to Shire and Aptevo Therapeutics, The Alliance Pharmacy and George King Bio-Medical for making this event possible.

Martha also added thanks to the corporations that sponsored Barry’s rides over the years. The biggest sponsor was Baxter/Baxalta, which contributed almost 40% of Barry’s total with $100,000.  The Alliance Pharmacy distinguished itself as being the only company to support all six of Barry’s rides for a total of $30k.  Biogen/Bioverativ, Bayer Healthcare, George King Bio-Medical, Amerisource Bergen, Matrix Health Group, Aptevo Therapeutics, American Homecare Federation, Emergent Biosolutions and Optum Rx also contributed to this success.

Wheels for the World was championed by the Lone Star Chapter of Barry’s home state of Texas, Hemophilia of Indiana, NEHA and Sangre de Oro. The Colburn Keenan Foundation also gave in 2014.

Most special to Barry were the nearly 250 individuals who gave to his effort. Priscilla Oren was the first donor of every ride! She is joined by Kevin Anderson and Lisa Schober who devotedly donated to all six rides.