The Most Powerful Man in America–with Hemophilia No Less 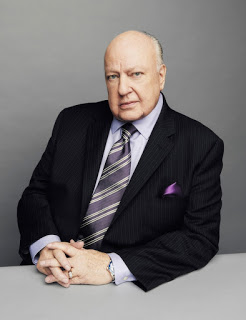 The man who built Fox News into a political media giant has been called the most powerful man in America by President Obama… and also happens to have hemophilia! Roger Ailes.
During this raucous political season, it’s worth looking at the man who helped create the news outlets for conservative voters in America.

The following is a book review by Richard Atwood, our columnist for PEN: Gabriel Sherman’s 2014 biography The Loudest Voice in the
Room. How the Brilliant, Bombastic Roger Ailes Built Fox News — and Divided the
Country is fascinating for its look at this interesting man, who once sat on the National Hemophilia Foundation board of directors.
Roger Eugene Ailes was born on May 15, 1940 in
Warren, Ohio. When two, he bit his tongue and bled, leading to a diagnosis of
hemophilia. Ailes attended Ohio University where he enrolled in Air Force ROTC
for two years, but his eyesight and other physical problems were an issue. He
even tried to enlist. Not knowing how long he would live, Ailes did not openly
discuss his hemophilia with most of his classmates. His older brother, a
physician, linked Ailes’ temper to his medical condition. His parents divorced
while he was in college. Ailes married Marjorie White in 1960. Beginning in
1961, he worked as a producer for The Mike Douglas Show at a television
station in Cleveland. Ailes kept his hemophilia a secret. When the show moved
to Philadelphia in 1966, Ailes was its executive producer. He treated politics
as entertainment. After an interview with Richard Nixon in 1968, Ailes worked
as a media advisor, or image consultant, for Nixon’s presidential campaign
before being fired by the RNC in 1970. While separated from his wife in 1972,
Ailes was agent for, and romantically involved with, the actress Kelly Garrett.
As a Broadway producer in the 1970s, Ailes had both successes, such as Hot l
Baltimore, and several flops. Ailes took risks with sky diving, tearing his
ankle ligaments, while also becoming paranoid about his physical safety. He had
brooding moods, increased weight and pent up anger. He demonstrated his
conservative political beliefs when he was a consultant and news director of
TVN (Television News Inc) for two years before it shut down in 1975. Ailes
broke up with Garrett in 1977, then became romantically involved with Norma
Ferrer who had two children. He divorced White that year and married Ferrer in
1981.
Ailes was most successful as a political consultant from 1980 to 1986.
After a fist fight, he had swollen hands. He was known to make sexual
approaches to female employees when he was executive producer for the Tomorrow
Show with Tom Snyder. His father died of Alzheimer’s in 1983, and his
weight ballooned again. Ailes published his book of self-help wisdom, You
Are the Message, in 1988. He became an executive producer for Rush Limbaugh
in both radio and television. He worked for 28 months at CNBC, beginning in
1993, and learned how to turn news into entertainment. He moved to the America’s
Talking cable channel in 1994. He divorced Ferrer in 1995, this time a more
expensive change. Ailes now walked with a limp. He moved to MSNBC in 1995, and
left a year later. Roger Murdoch hired Ailes in 1996 to be chairman and CEO of
Fox News. Ailes’ book became the cable channel’s sacred text. His fear for his
personal safety increased. He married Beth Tilson, a divorced producer whom he
met at CNBC. Ailes’ son, Zachary Joseph Jackson Ailes, was born on January 1,
2000. Ailes hired Bill O’Reilly, his brightest star. Fox News passed CNN for
good in ratings in 2002 after the Monica Lewinsky affair in 1998 and the 2000
elections.  Ailes hired Glenn Beck
from CNN in 2008 and supported the Tea Party in 2009. Many conservative
politicians became employees of Fox News.
After building a mansion in Garrison,
New York, 46 miles north of NYC, Ailes bought the Putnam County News &
Recorder in 1988, installed his wife as editor, and changed the local paper
to reflect the conservative views of Fox News. Ailes continued to demonstrate
his fear for personal safety and his paranoia, and he shared his conspiratorial
worldview with his wife. Ailes also was in charge of Fox Business Network that
was launched in 2007.
Ailes remembered his father’s lessons and had a ‘Rosebud’ story.
“The cruelest lesson Roger would speak of occurred in the bedroom Roger shared
with his brother. Roger was standing on the top bunk. His father opened his
arms wide and smiled.
“Jump Roger, jump,”
he said.
Roger leapt
off the bed into the air toward his arms. But Robert took a step back. His son
fell flat on the floor. As he looked up, Robert leaned down and picked him up.
“Don’t ever trust anybody,” he said.” (p. 7).
This biography covers Ailes’ childhood rather
quickly, but his hemophilia is stressed more often during his younger years.
Yet a specific diagnosis and family history of hemophilia is never provided.
The book is more an analysis of Fox News than a life story of Ailes for his
older adult years. There are 6 pages for A Note on Sources, 98 pages of Notes,
13 pages for Selected Bibliography, and 20 pages for the Index. Hemophilia is
cited 10 times in the text, and is listed twice in the Index, under ‘Ailes,
Roger’ and by itself. Oddly, there are no photographs. The author interviewed
614 individuals in addition to referencing the written sources. Ailes was not
subjected to a psychological analysis, yet he was frequently described as
impulsive, paranoid, aggressive, and a ruthless competitor, all influenced by
his ego and temper. He was also quite successful. The author, who never
received permission to interview Ailes, is a journalist and editor living in
New York City with his wife.
It’s worth Googling Ailes to read about his work, his attitudes and thoughts about the political candidates; a fascinating man with hemophilia!

Another book read by Richard, but not as good, is Zev Chafets’s 2013 book Roger Ailes: Off Camera.
New York, NY: Sentinel. 258 pages.