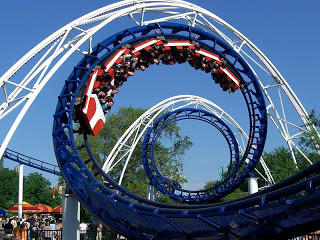 The story in the news about the woman who died at a theme park in Texas got me thinking of rerunning one of our articles about risks for kids with hemophilia at theme parks. Here is a great rerun from the August 2002 issue of PEN, written by Dr. Richard Lipton.
Summer is here, and millions of families will seek adventure and thrills at theme parks like Six Flags, Disney World or Universal Studios. What a wonderful day a family can have at a theme park! Kids and parents love the rides, water slides, entertainment and general excitement. Are there any special safety concerns or precautions for families with a child with hemophilia? Yes!
Think of a theme park as a very big playground, but with an atmosphere favoring less parental control—a setting that can lead to impulsive behavior by children.
Imagine yourself at a typical theme park. You’ll have general health concerns. Parks can be crowded, hot and sunny—so apply sunblock and drink plenty of water.
Theme parks have paved surfaces, harder than public playgrounds, and filled with children running. Your child needs to wear appropriate footwear. Flip-flops or “Tevas” might be suitable for water activities, but sneakers are safer for walking and running.
You’ll also have concerns specific to the theme park you visit. “Mind Eraser,” “Shockwave,” and “Nitro”—what about these special high-end rollercoaster rides? Riders are frequently subjected to changing speeds that result in “G-forces” similar to those experienced by trained, appropriately suited and restrained combat fighter pilots. Your child becomes “Top Gun” in shorts and a T-shirt! Parents should remember that any person can experience head trauma on these specialized rides.
How is the head affected by a ride like the Mind Eraser? Recall that your brain is surrounded by fluid; it is floating inside your skull. This arrangement cushions the brain, and reduces movement, protecting
your brain from direct trauma and sudden shifts in skull position. It works quite well in our daily activities, and in automobiles (as long as we’re wearing a seatbeat). Now imagine speeding over the crest in a roller coaster. All of a sudden you’re weight- less, like an astronaut—this is called a Negative G- force. (You’ll have no trouble recognizing this moment, because every- body screams!) Then, after the coaster speeds down and resumes its climb, you feel your backside being pushed into the seat. It feels like the force of gravity has suddenly increased. This is a Positive G- force. Although your body is restrained, high G-forces could exceed the protective cushioning of fluid surrounding the brain, and could cause injury.
Interestingly, this year New Jersey became the first state to seek legal restrictions on the maximum allowable G-forces on amusement park rides. The regulations result from concerns raised by physicians about the association between neurologic damage and high G-forces on these rides. Certainly, such injuries occur very infrequently, but serve as a cautionary note to all riders of high-end roller coasters—with hemophilia, or without.

My advice? Take some precautions. Level the playing field by giving your child a prophylactic infusion of factor the morning of your visit to a theme park. Yesterday’s dose is not sufficient! Don’t wait until your child reports the symptoms of a bleed—it may be too late. Besides, your child is not going to report the flop he took running to the haunted house until you’re stuck in traffic on the long, long ride home.
Infuse first, then have a great time!
Dr. Lipton is the Physician in Charge of the Hemophilia Treatment Center at the Long Island Jewish Medical Center. As a United States Air Force Physician (1966–1968), Dr. Lipton knew several fighter pilots, who took him on “joy rides” (with lots of G-forces) that more than fulfilled his childhood fantasies.

Great Book I Just Read
The Haunting of Hill House by Shirley Jackson (Kindle)
This could be America’s greatest ghost story novel. Two women are summoned by Dr. Montague, a paranormal investigator, to Hill House, a deserted Victorian mansion, once owned by Hugh Crane, whose wife died in a horse-drawn carriage accident coming up the long road to the house, on her first trip there; Hugh’s daughter was raised there in isolation, and eventually became an old woman, dependent on a caretaker, who abandoned her one night while having a romantic liaison–the elderly daughter died. The house is now “vile” in appearance and rumored to be haunted. The women are invited to stay for a week, to see if their presence may stir up any ghostly activity. Each women is believed to have some sort of experience with the supernatural. Theo is sharp, attractive, sophisticated and sure of her abilities; Eleanor is a plain spinster, shy and awkward, who spent the last 11 years caring for her sick and demanding mother. For Eleanor, this is the most exciting and significant thing she has ever done in her life. And so the story takes off, chilling and psychological. Is the ghost of the dead caretaker, whose life mimicked Eleanor’s, walking the hallways? Who is responsible for the pounding on the walls at night, the chilling laughter, the handwritten messages on the wall? Is Eleanor crazy, or is the house haunted? Skillfully written, a pager turner and a deep psychological profile, the book has justly earned its kudos. The 1961 black and white film “The Haunting” by the famed Robert Wise is truly one of the scariest movies I have ever seen… and yet “nothing” actually happens… or does it? Four/five stars.