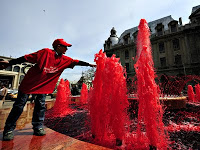 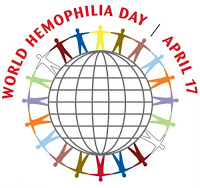 World Hemophilia Day was celebrated Saturday around the world in many different ways. The best story I’ve heard so far is how the Romanian Hemophilia Society turned a Buchrest city fountain blood red to raise public awareness of the disorder. I heard from my Romanian friend and partner Adriana that the goverment then pledged to increase funding to hemophilia 70%. That’s a big way to celebrate!

Likewise, many of the pharmaceutical companies make large donations of product or money to the World Federation of Hemophilia, to commemorate this day.

WHD falls on April 17, the birthday of the founder of the WFH, Frank Schnabel. As the WFH is headquartered in Montreal, many assume Frank was Canadian. He was actually a Californian, and moved to Canada to seek better health care coverage. We should keep that in mind on his birthday, especially here in the US where the health care debate rages on. 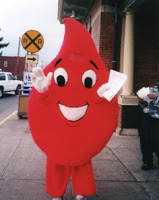 There are an estimated 300,000 people with hemophilia who get little or no treatment; most reside in developing countries. Some countries, actually a lot, get no factor at all. But we have small victories, and that too is what WHD is all about. 18-year-old Alfonso, from the Dominican Republic, is someone special to me. I’ve known him for over 10 years, since we started our first camp in the DR in 1999. He was shy, sweet and always smiling, no matter the pain. I used to tower over him, and now he towers over me! Last year, I enjoyed watching him mentor the younger boys as a counselor… and he hobbled about on a leg badly mangled by untreated bleeds.

I was so touched by how helpful he was at camp, and how much joy he brings to all, that I told him I’d get him anything: an iPod, new computer? I know he comes from a family with little means.

“I just want to walk normally,” he confided in Spanish.

His dream is coming true. He had surgery this year, with factor IX donated by a company. The hospital absorbed most of the fees (we helped just a little). He emailed me with extreme thanks for making this wish come true, and with many blessings and exclamation marks! 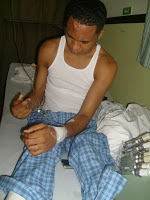 To me, this is what World Hemophilia Day is all about. Helping the world’s people with hemophilia, in big ways and small, concretely and measurably. I hope his life has been changed by this. I can’t wait to see Alfonso at our 11th Annual Camp, June 5, perhaps walking normally! 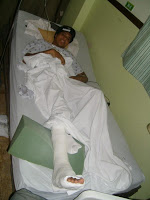 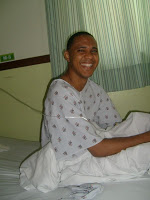