(Posted Wednesday, August 17) I have Internet after ten days! By now you may have heard we achieved our dream: our team summited Kilimanjaro on Wednesday morning, August 10, at 6:54 am, and raised over $52,000! I’ll give a detailed blog about that but let me finish up with Nairobi first. 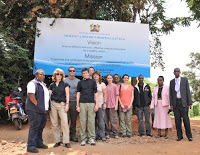 We were thrilled to hear that Eric Hill, president of BioRx and a sponsor, and his 14-year-old son Alex were finally arriving in Nairobi this morning, August 4, at 6:30 am. Their flight Tuesday was delayed in DC, which caused them to miss a connection, then they spent a day or so in Europe waiting for another flight to get out. The worst part is that their luggage containing their climbing gear disappeared! All the climbing gear needed for Kilimanjaro was in limbo. We thought they must be tired, and we had a full day of family visits ahead out in Murang’a, about a two-hour drive from Nairobi. Amazingly, they wanted to go straight from the airport, meet us at the hotel and come with us.

They were in for an amazing day. After introductions to Maureen Miruka, president of the Jose Memorial Haemophilia Society-Kenya, and Paul Kamau, person with hemophilia who also works for the JMHS, Isaac and Adam, young men with hemophilia and volunteers, Jagadish, who has a son with hemophilia and is a board member, we all piled into the van and headed out. With us: Julie Winton, RN, of BioRx; Kara Ryan (20), medical student; Alex and Eric Hill, Jeff Salantai (31), person with hemophilia, of BioRx; and Mary Kelley (17), my daughter. Battling thick Nairobi traffic, we reached Murang’a in two hours and first stopped at the Murang’a District Hospital. Driving up the red clay road and driveway, this was our team’s first look at a county hospital in the developing world.

Murang’a is where a whopping 80% of the JMHS’s hemophilia patients reside. Maureen and her team have done exceptional outreach to locate the patients. We met with Dr. Charles Kigo, chief of the hospital and Dr. Nguyo, who treats the hemophilia patients, and they were amazed to meet Jeff Salantai, who has hemophilia and is healthy, physically fit and strong. Dr. Kigo kept eyeing him up and down in amazement. Jeff shared his treatment regimen and lifestyle. We also presented the doctors with a gift of much-needed factor.

We toured the wards and were able to see the conditions of rural healthcare, a place where 40% of births still happen in homes. The waiting room is outside, with bench seats, protected from the elements only by a tin roof. There is a nice neonatal ward, which is nonetheless in need of a new paint job and incubators for preemies. One hemophilia patient was admitted, Zakayo, who I wrote about in April 2010, when I visited him in Muthare, the psychiatric ward in Nairobi. The poor young man had been traumatized by rioters, and admitted. Now, he was in the county hospital to treat a bleed. Still, he needed a few more tests before being released, which he could not afford. We gladly paid the bill to get him released the next day and return home.

Next stop: Peter’s home, my second visit here. Peter is Zakayo’s brother, and also has hemophilia; he looked great on this day. His home was just a quick ride up a dirt road from the hospital. Our team sat with Peter and his mother to hear how they cope with hemophilia. They were able to look about and see their poverty: a small, two room home for four adults and one child. No place to cook; the mother must cook outside in a pot. They own a bunk bed, an old couch, a small table and chair set, a bookshelf and one bed for the mother. The mother is single and pays heavily for rent and electricity. She cannot afford these things. Some days she cannot feed her children. And she must look for odd jobs because she cannot hold a steady job; the boys require too much care. How will she live? We gave her some money to help her stay solvent, pay her electricity bill in arrears, and vowed to help more. 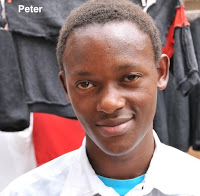 The images of poverty continue to assault us as we moved on. Next stop: Stanley.

I met Stanley in April 2010. He was in a new location now, again a short drive from the hospital but situated off the main road, on a dirt road and down a dirt path. There’s no electricity or plumbing. They use candles, and an outhouse. Stanley has a small “farm”: one cow and some vegetables. He told us about how difficult it is to farm with joint contractures. He wants to start a business, being a street vendor selling shoes. It would cost $400 to get started, to purchase the initial inventory of shoes, and Maureen and I immediately considered him for our new micro-loan program. Our team was able to ask questions about his treatment, bleeding episodes, and life day to day. His wife is pregnant with their third child. This was an eye-opener for our team, to truly see how the other half lives. Hemophilia in such a place can be a death warrant. Julie immediately saw the need for home infusion, something that is unheard of in most developing countries. Our goal will be to break this mindset and get as many patients as possible on home infusion. We presented Stanley with his Save One Life money.

Alex began handing out candy to the many children who gathered to see the strange parade of foreigners, and they giggled and jumped with excitement! The children followed Alex and the team right up to the van windows, hoping to catch more.

Last stop before heading back to Nairobi was at the house of Virginia, Paul’s aunt. She remembered me and greeted each of us as if we were long lost family members! We all got a kick out of her enthusiastic hugs and megawatt smile. This is a beautiful lady with an incredible face etched with character. Again, the extended family lives in a jungle or forest: dirt floors, no windows, and no electricity or plumbing. They farm a few vegetables. The biggest shock was seeing little Derrick, who has a sponsor in the US. Last year’s photo showed an adorable little two year old with hemophilia. Now, he had suffered a fall, hit his head, and had a massive swelling on his forehead. Luckily, Derrick is well cared for by the JMHS, and has been receiving treatment. But with no car, no public transport, families like this are stranded! Dr. Michael Wood, founder of AMREF, the Flying Doctors of Kenya, once said that in Africa, you cannot wait for patients to come and see you; you must go see them or they will die. This is the foundation upon which Save One Life operates—we must see the patients, note their needs, and empower them. Home infusion is the only way.

I’m happy to say that all of the patients we visited have sponsors, and their sponsorship money makes a huge difference in their lives. They struggle for every single Kenyan shilling they earn, just to survive. Our dollars improve their lives instantly, giving them money needed for transportation, medicine, food and vitamins. On this visit, our team saw first-hand the difference Save One Life in partnership with the JMHS is making. 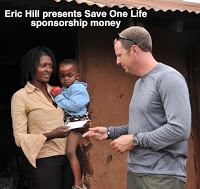 Do you want to sponsor a Kenyan child with hemophilia? Please visit www.saveonelife.org! They need your support!