“My bones are older than me”

And an
interesting phenomenon: learning how to challenge each other’s ideas. When
someone offered an idea, such as the most important need was to get more
factor, Shady and I challenged that. Spending your time securing factor is
urgent, especially when your child has a bleed. But allowing the registration
issue to languish means you will only get dribs and drabs of donated factor. Focusing
on registering now will open so many doors later. Short term pain for long term
gain. The RFH was learning now to priorities needs.

After this
we did goal setting, based on those needs. And then prioritizing those goals.
This took over an hour. Later, Shady asked the group to plan a birthday party,
as an exercise in planning a hemophilia event later on (like World Hemophilia
Day next April). It was a fun exercise to see who remembered what action item
was needed. And ironic: that very day, June 15, was Shady’s birthday! Unknown
to him I ordered a cake. And right after the birthday party exercise, we took a
break, and out came a cake with candles! It was fun to all join in and sing him
happy birthday. We thanked him for his dedication for spending his birthday working on Rwanda’s hemophilia future. Then we learned that we had another cause to celebrate: James’s wife had just given birth a few hours ago! But he stayed to complete the workshop with us. Such dedication!
After break
came Stakeholder Awareness, an exercise I’ve never done before so this was
educational for me. Even just learning who to identify who is influential and
how much they were influential—Prince offered the media, which was
brilliant—and others offered families, the public, the ministry of health and
more.
By the end
of the day we had the components of a strategic plan, with action items. It
will take many more meetings to hammer out the details but it was a powerful
five hours. Afterward, we dined outside in the night air and had a buffet
dinner together. Shady had to dash off to catch a flight but the rest of us
relaxed and shared our thoughts on this truly historic day.
We planted
the seeds of growth, and now, it’s up to the Rwandans to take next steps on the
road to better hemophilia treatment care. 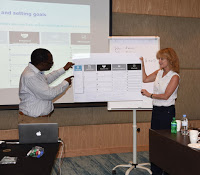 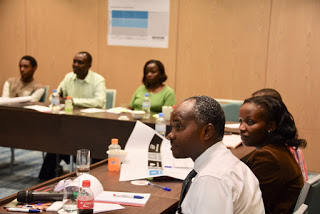 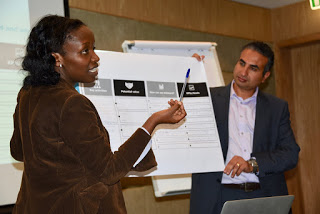 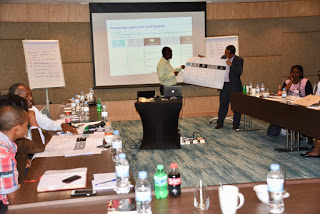 And they
deserve it and can do it. Rwanda spends more on healthcare per capita than most
African countries. The country is peaceful, functions well and has infrastructure.
It’s a small country, about the size of Massachusetts, my home state. Best of
all, it has interested and dedicated doctors. All ingredients of success.
There will
be challenges. I read a Rwandan proverb that says: If you are building a
house and a nail breaks, do you stop building, or do you change the nail? We don’t want them to ever stop building.
My vision?
To see Rwanda join the WFH, and be present next year at the WFH Congress in
Scotland, where they will meet the world community, and their fellow Africans,
to learn, to share and to get the resources that so many others get. When they
join everyone else, they will then be able to determine their treatment and
destiny, and a whole generation of Rwandans will grow up free of the pain and
disabilities they suffer now.

To see photos of the trip, go here.

3 thoughts on ““My bones are older than me””