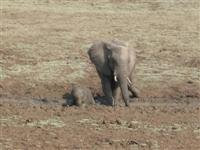 I had an experience on Saturday that really speaks to this community and its dedication. For some strange reason (maybe because my daughters and I had a lively discussion on how much we adore the show Animal Planet) I was reminded of a scene in which a baby elephant was stuck in some mud, in Africa. Her entire herd, including her mother, rallied around the calf to assist her until she was freed. Naturalists were amazed by how communal and compassionate elephants are. (You can actually watch this episode on YouTube.)

So a 30-year-old man, not a baby elephant, called my cell phone at 10 am Saturday. “Jack” has mild hemophilia and has never self-infused. He also has no insurance and was in the middle of a raging psoas bleed. My son has had those and they are excruciating. I felt for him. I could not ship him donated factor through Project SHARE. The best I could do was to provide numbers: PSI, ACCESS, Hemophilia Hotline (Do you have those numbers handy??). He went to an HTC on Friday (his first time, I think) and was given some free factor, but not enough to last him a full week. Worse of all, there he was at home, still bleeding, and he needed an infusion that day. And he didn’t know what to do.

No way would I coach him over the phone on that. So I called some friends, and fellow “elephant” mothers: Natalie Russo, long time friend, on one side of Florida; Linda Thomas, executive director of the Florida Hemophilia Association, another long time friend, closer to where the young man was located; Kim Madeiros, executive director of Factor Foundation of America, also close to where he lives. What happened was amazing!

Natalie took my call and wanted to help, but was too far away. Kim returned my call– from the beach. She was out having fun with her son and her 14-month-old daughter. No matter. Bleeding patients come first. I could hear the roar of the waves as she spoke, her children squealing in the background. And Linda called. She works now for Walgreens, and so could not infuse Jack, even though she has a 26-year-old son with hemophilia and lives close by. But, her brother lives only 10 minutes from where Jack lives and he is a doctor. Problem solved! Our hemophilia herd rallied around this man, and within one hour we had located a way for him to avoid the ER and get an infusion.

For Jack, this was the wake-up call of a lifetime. Talk about stuck in the mud. I can understand how those with mild hemophilia can go their childhood never learning to infuse. They bleed so infrequently that it’s not practical sometimes to teach them. But as these guys age, their past catches up with them. Jack confided that he had some joint problems. I think it’s true what doctors tell us; even one bad joint bleed can set us on the road to arthritis.

So Jack knows he has to make a plan: register with the Floria hemophilia organization; visit an HTC, not just any hematologist; learn how to self infuse; get newsletters and books and read about hemophilia; meet some of his community brothers with hemophilia; and find a way to solve his insurance problem. You just cannot be without insurance if you have hemophilia! Even if it means going on Medicaid. Fortunately, there are many programs to get help in our community.

Jack was lucky, but I wonder how many other young men in our country have hemophilia and who live on the fringe, not aware of the community around them. They are like baby elephants with no herd to care for them. I am proud of Natalie, Linda and Kim, who went out of their way to help, and thank them for showing so much compassion and dedication. These traits are what make our community as special as it is. And sorry for referring to you ladies as elephants; you know what I mean.

Book I Just Read: The Cure, by Timothy Brantley

“The Cure” alludes to us as self-healing organisms: “You are the cause, you are the cure.” Nothing here is new… at all. Brantley (who is not an MD, though he has “Dr.” in front of his name, as in PhD, obviously trying to lure us into thinking he is an MD) has consolidated material from Harvey and Marilyn Diamond, who had a great book in the 70s called Fit for Life (four stars!), from Pamela Secure’s Three Day Fast, from John Robbins’s Diet for a New America… ground-breaking books published years ago which already laid out his principles, which are not new or earth-shattering. Drink water. Avoid table salt. Consume mostly fresh foods. Stop eating pastries, bread, sugar, colas. Chew your food more. Drink water. See what I mean? Nothing original. He himself has a compelling story: his father was an exterminator, and his mother eventually died of cancer, leaving him determined to unlock mysteries of cancer and illness as they relate to our diet. Problem is, people have already done that. He’s endorsed by several Hollywood stars (hmmm, no doctors? No nutritionists?) and appears on TV talk shows. Why not? He’s handsome and hip. But original? Naw. Strangest of all, after spending 90% of the book telling us to eat food as “Creation” made them, he promotes his herbal pills and concoctions by asking you many, many times to visit his website, which is at least 2 years out of date. If you have never read any book on diet and illness, you might like this and I think what he says is true. But I’ve read better. One star.

2 thoughts on “Saving Elephants in Florida”