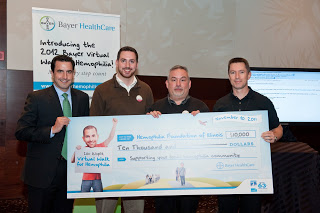 While I was preparing to climb Kilimanjaro in August, other people were raising funds for hemophilia in a different fashion—“virtually” walking!

Bayer HealthCare this past year supported a Virtual Walk for Hemophilia, an innovative interactive contest that raises awareness and funds for those living with a bleeding disorder. Its purpose is to raise money for NHF and chapters, get the community involved, and raise awareness about bleeding disorders. By November 6, 15,637 people – those with and without hemophilia – had signed up. Pretty impressive when you consider that the number of people with hemophilia in the US is estimated to be about 15,000-20,000!

Bayer had a special ceremony at NHF’s annual meeting in Chicago, where members of the hemophilia community commemorated the successful conclusion of the first walk. How did they do? Bayer provided $30,000 in sponsorship funds to the national office of the NHF plus an additional $30,000 in sponsorship funds to the three chapters with the greatest number of walkers, for a total of $60,000!

“We checked the website every day to see our standing, and it really pushed our members to reach out to others directly and through social media outlets like Facebook and Twitter,” said Bob Robinson, Executive Director, Bleeding Disorders Alliance Illinois. “Most importantly, the sponsorship funds we’re receiving will go to educational and support programs for people with bleeding disorders, including summer camp for children with hemophilia, which can have a lasting impression on their lives.”

As the first walk was so successful, Bayer also kicked off year two of the Virtual Walk as a means of continued support for hemophilia communities across the U.S. and globally—and Save One Life, the nonprofit I founded! In 2012 up to $7,000 in sponsorship funds will go to Save One Life an international organization that offers people and organizations the opportunity to sponsor a child or adult with a bleeding disorder in a developing country.

For more info and to participate, visit: www.walkforhemophilia.com

This is one of the best books you will read this year. The true story of Louis Zamperini, juvenile delinquent, hyper energetic with a penchant for trouble, who is steered into track by his loving older brother and becomes a running star. By age 19 he is plucked from Torrance, California and sent to the 1936 Olympics in Munich, Germany to represent his country. He just misses winning a medal, but catches the eye of Hitler, who asks to meet him.

When he returns home Louis is drafted to serve in World War II, and becomes a bombardier on a B-24. After many victories, his plane is forced down in the Pacific, and the story takes amazing turns—you will see where Louie’s drive, discipline and energy helps to save his life and those of his mates. He survives the crash, and then survives an unbelievable 47 days at sea, fighting off sharks, dehydration and starvation. When he hits land, it’s at a Japanese prison camp in the Marshall Islands. His troubles, incredibly, are just beginning.

Louis eventually is sent to the worst of all places, first Omori and then Naoetsu, the first under the sadistic control of commandant Mutsuhiro Watanabe (the “Bird”), who takes pleasure from inflicting slow, pathological and grinding psychological and physical torture on the inmates. When the Bird learns who Louie is, the “Torrance Tornado,” he ferrets him out daily and unleashes brutal, slow, unending torment, including beatings until he is unconscious and 14-hour days hard labor on a 500-calorie a day diet. “Unbroken” refers to Louie’s tenacious mental spirit, which would not relent, submit or be defeated, despite years of torture.

Hillenbrand deftly describes the bombardment of Japan by Allied troops, until the Hiroshima and Nagasaki bombings ended the war. Louie eventually came home, healed physically but not mentally. Post-traumatic stress disorder was not even identified then, and Louie suffered terribly, and caused those around him to suffer. It was heartbreaking to know that this man survived so much, and retained his dignity, now only to lose it slowly through the psychological scars of war and torture. The most memorable part of the book has to be the end, where he finds salvation, in a most amazing, uplifting and permanent way. He is truly liberated then and only then, and healed, and becomes an instrument of inspiration in sharing his story with the world. Louis is still alive, at age 94, and still going strong, still unbroken.

Hillenbrand, author of Seabiscuit, is a technically solid writer, but shines as a master storyteller. Not much flowery prose, but this book is a gripping page-turner. I read it while cooking, walking down a flight of stairs, ironing, on my treadmill. I couldn’t put it down; it is inspirational and a testament to human spirit and resilience. I could not help but feel proud of our troops and our country, back when a war had clear-cut good guys and bad guys. Five stars.