Camp Yes I Can… and I Will! 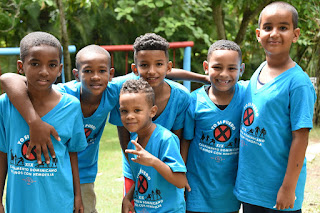 Five years sure went by fast. That was the last time I attended the Dominican Republic hemophilia camp “Yo Sí Puedo!” (Yes, I Can!). I don’t understand how the time slipped by, especially when I have such a deep attachment to the DR, which is only a 4-hour plane ride away. The DR was the first developing country I ever worked with, back in 1998, when there was no camp, and no factor. While Project SHARE supplied factor when we could, together with the fledgling Fundación Apoyo al Hemoílico (FAHEM) we created the DR’s first hemophilia camp. We were all new at this, so the first camp was a bit wild… but magical. While the camp grounds were trashed by Hurricane Georges, no one much minded when Red Sox pitcher Pedro Martinez, Houston Astros Moises Alou and Toronto Blue Jay Tony Fernandez showed up to autograph baseballs and play ball with the kids! 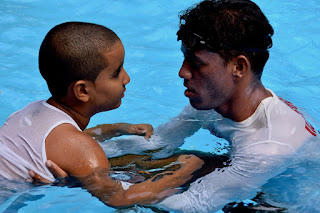 Those children I first met at camp are grown now, and many are serving as camp counselors. In fact, the one who was the quietest at that first camp, Brahian Valdez, is now the most extroverted, and has become Camp Director!

It was a joyous reunion in the parking lot of the Robert Reid Cabral Hospital in Santo Domingo. The teens were men, the little boys were teens, and a new generation of youngsters with hemophilia were present, wondering who this “gringa” was.

And then it felt like no time had passed. This was my ninth camp, so I knew everyone pretty well, except for the smallest ones and of course the newcomers. One of the joys of camp is that you get to see children grow and hopefully flourish through the years. While we have lost some to bleeds through the years, the majority are here, and have become best friends. 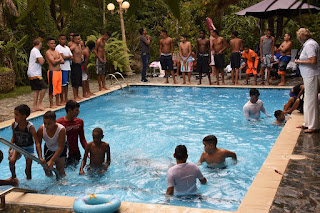 The theme was “Super Heroes,” perfect for this group. I could easily see during the four days of camp in the Lomas Lindas area outside of Santo Domingo that the older guys hobbled about on stiffened ankles, arthritic knees, and misaligned hips. The younger ones had no joint problems and dashed about madly, enjoying the excitement of camp and the freedom from their parents. After working with developing countries for 20 years now, this amazed me. Children without joint problems. Here, in the Dominican Republic. 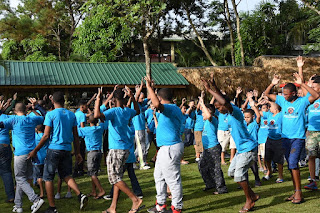 Camp is now a highly structured program that mixes plenty of activities with quiet time and lectures for the 60 campers with hemophilia. Each day starts around 7; by 7:30 everyone is on the grass doing exercises, led by Cuchito, the coach. Blowing his whistle, Cuchito has the children stretch, do light exercises and then march in ever tightening circles, which ends in a crush and everyone cheering. Breakfast follows, which is always delicious. The food in the DR is superb! Then activities: it might be swimming in the pool, arts and crafts, or a game of ball that serves as teambuilding.

The pool is the favorite unstructured activity. Though they live on an island in the Caribbean, most of the children never get to spend time in water. The surf near the beaches in the capital is too rough. And the children come from very humble homes, where there is no access to a pool. Camp gives them a chance to enjoy water, which almost every child loves.

Camp founder Haydée de Garcia, who has an adult son with hemophilia, realized this and arranged for top-notch, young swim instructors to visit, and they gave each child swim lessons which mostly consisted of overcoming a fear of putting your head under water. Once that fear was conquered, the children enjoyed practicing floating and strokes. 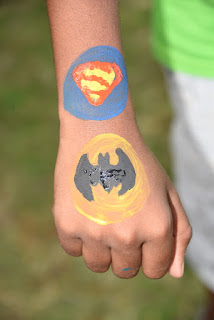 The favorite activity, judging by the cheers and participation level, is wiffle ball. You must know that baseball is almost a religion in the DR! The DR sends more ballplayers to the US than any their country, and about 25% of all ball players in the leagues are from the DR. While we don’t use baseballs or softballs for safety reasons at camp, the kids and adults attack the wiffle ball as if it were! The games are exciting, loud, fun, funny and tiring!

This year we even had a bonfire just outside the camp facility, where we roasted marshmallows and everyone participated in some singalongs that ranged from traditional Spanish songs to rap!

A great presentation was made by Fendi, who was at the original camp in 1999. Wearing a Spider-Man mask, he talked about how the boys may have developed hemophilia: inherited, like WonderWoman; a mutation, like Wolverine; or acquired, like Storm. Very clever! And he stressed the need for community, like the X-Men, and proposed a program called Hermanos X (Brothers X), to keep this community strong.

The beauty of camp is abundant factor. Prior to about 2016 camp might be touch and go; you cannot have a camp if there is no factor, and the DR has struggled to get factor. SHARE always tries to assist and we stockpile factor starting in January for camp. A medical ward is set up before camp ever begins where everyone gets factor. This year? Everyone got factor prophylactically. How does that happen?

Well, we had our own superhero at camp this year. Bioverativ CEO John Cox visited the camp with his wife Ivette (who is Dominican) and his four children, to experience hemophilia camp in a developing country, and to see the results of his visionary idea (along with other visionaries; read about it here) to donate one billion IU of factor to the World Federation of Hemophilia (WFH) over 10 years. With this strategy, knowing there will be a steady flow of factor that doctors can count on, hundreds of children around the world in developing counties are now on prophy for the first time ever. These include “my” boys, here in the DR, here in camp. As I watched the older boys still hobble about, I watched the younger ones race and jump and climb, without fear, without arthropathy. It seems like a miracle, but it is in reality this vision come true—that with proper treatment, children with hemophilia can live full and active lives, in our countries and theirs. 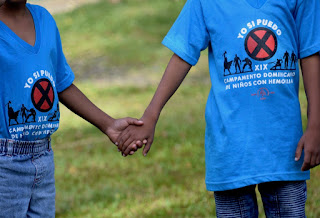 The World Federation of Hemophilia, at Bioverativ’s request, donated all the factor to camp this year. No child had to worry about running out, which allowed them to run about! 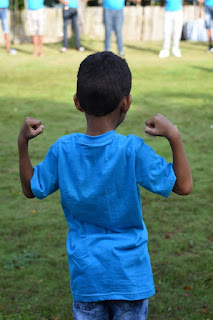 And for the first time, WFH attended camp. Miquel Izquierdo, WFH regional director, arrived from Mexico to enjoy the camp—he himself has hemophilia! He fit right in and was beloved by all. He witnessed the great results of the factor donation, and also of Save One Life as about 16 enrolled beneficiaries attended camp, all looking great and doing well!

We all loved having outside visitors, and next year, for our 20th anniversary, I am hoping to entice more volunteers from the hemophilia community to attend, to see the needs, the progress, to make connections. Despite the overwhelming success of camp, we can do more. Yes, we can… and we will! 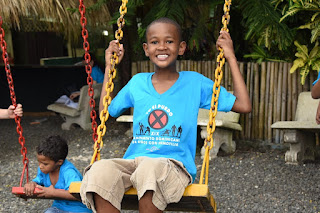 “I want to thank you and Presidenta Haydée Benoit de Garcia for including my family in hemophilia camp in the Dominican Republic.  We were so impressed with the camp and honored to be there. The Dominican boys were learning to deal with hemophilia in a poor country, and they were having fun too (the lively whiffle ball game was our favorite activity).  It was clear that this camp was something these boys looked forward to all year.  What struck me most was that Haydée and her counselors were teaching the boys to live a values-driven life no matter their circumstances.  Haydee’s leadership and her love for these boys — as well as yours, Laurie — is clearly impacting generations of Dominicans living with hemophilia. My children walked away believing in the camp theme “Yes You Can!” (¡Yo Sí Puedo!). Thank you for all you do, Laurie, and for the role of Save One Life in impacting lives in the Dominican Republic and around the world.”

Thanks to John Cox and family for spending family and vacation time with us, to the WFH and Bioverativ for the factor donation, to uniQure for gifts for the children, to Haydée and team, for another great camp!

PrevPreviousAmusement Parks and Summer Safety
Next100 Years Ago: Prince with Hemophilia DiesNext