100 Years Ago: Prince with Hemophilia Dies 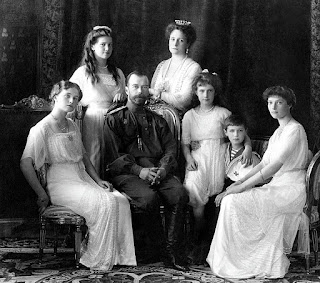 This week is a very special: it’s the 100th anniversary of the death of the last Russian royal family, the end of the Romanovs. Special because not only did it lead to a massive change in world history, but it was also the death of the little prince with hemophilia, Alexis.

Hemophilia appears to have played a vital role in the story of the Bolshevik takeover of Russia, and subsequent spread of Communism. In Nicolas and Alexandra by Robert K. Massie*  Tsar Nicholas II, though not a very clever leader to begin with, is so distracted by his son’s suffering that he unwisely allows the “mad monk” and faith healer Rasputin to gain access to the inner circles of the royal family, while at the same time ignoring and not heeding the needs of his people for food and better quality of life. Rasputin is able to influence the course of events as Russia is battling the first World War, and yet also appears to have a calming effect on Alexis during his terrible bleeds.

There are no spoilers: everyone knows how this story ends. The entire family—Nicolas, wife Alexandra, daughters Olga, Tatiana, Anastasia and Maria, and son Alexis—was cloistered in Ekaterinburg under house arrest while the Bolsheviks take over. Although they are promised safe passage to England, where Nicholas’s cousin and doppleganger George V is on the throne, the family was instead slaughtered in the early morning hours of July 17, 1918. It was a horrific scene; the princesses did not die at once as they had about 18 pounds of royal jewels sewn into their clothing, to take to England with them.

Their bodies were eventually tossed down a mine shaft, which was not discovered until 1979, and even then not revealed until 1989, when the Russian archives were officially opened.

On August 15, 2000, the Russian Orthodox Church announced the canonization of the royal family. Alexis, the prince with hemophilia, would now be known as Saint Alexis.

And DNA tests would later reveal that the royal family, all the way back Queen Victoria, Alexis’s great-grandmother, had factor IX deficiency.

You can read more about this fascinating story hat changed word history by reading Nicolas and Alexandra, or one of many other books and on-line resources. I am happy to say that we are currently revising our children’s storybook called Alexis: The Prince Who Had Hemophilia, with new illustrations, done by a Romanian with hemophilia!

If you have hemophilia, this is a story you must know.

*The author is father of Bob Massie, currently running for governor of Massachusetts, who was born with hemophilia!

PrevPreviousCamp Yes I Can… and I Will!
NextIntroducing the new faces of Just B from IXINITY®Next