Dogs Get Hemophilia, Too

712
Here’s a wonderful article I discovered on the newswires, and shows that dogs suffer from hemophilia too! This story has a happy ending and makes me wonder if factor concentrate would work on canines as well as humans?
Sick Dexter’s saved…by his hero hound brother! 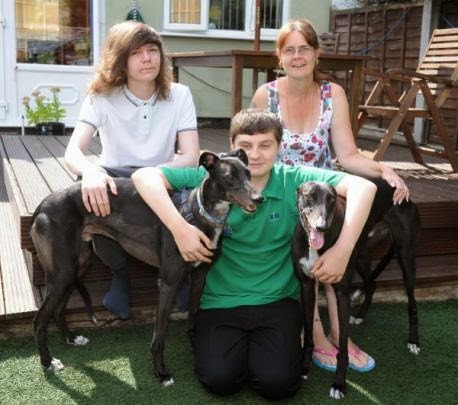 A
GREYHOUND won the race of his life –
after his brother donated blood to keep
him alive.
Dexter,
aged six, was close to death after he suffered internal bleeding while
undergoing surgery for a suspected muscle tear.
His
condition of hemophilia meant he couldn’t stop bleeding and vets at YourVets24,
in Brook Road, Rayleigh,
said he needed a blood donor to keep him alive.
So in
stepped Dexter’s brother Timmy, also six, to save the day.
Both dogs
are now recovering at their home in Richmond Avenue, Shoebury.
Samantha
Haynes, 42, Dexter and Timmy’s owner, said she was relieved to have them both
back home safe.
She said: “It
was very scary and we really thought Dexter was going to die.
“The vets
said if we had not got him there, he would have died. We’ve had them both since
they were two and they are part of the family.
“They had
been abused before we got them and Dexter was a nervous wreck – he was even
burnt with cigarettes when he was a puppy.
“He’s had
such a tough start in life that we couldn’t lose him in this way.
“They were
in Ireland being trained up and were separated for six months and didn’t even
remember each other.
“We took them on and they have never
raced, and are both still very nervous.
“Dexter is
such a loving dog and is so gentle. If he had died we would have been mortified
– he is like one of the children.
“Timmy
really did save his brother’s life. They are both doing fine and we are
spoiling them both.”
Dexter was
taken into the vets after Samantha noticed he was acting strangely.
She said: “He
put his head on my lap and I stroked him and he yelped in pain.
“Me and my
husband rushed him to the vets.”
They
discovered his internal bleeding could not be stopped due his hemophilia, so
his only hope was a blood donation from another dog.
Fortunately,
Timmy, was a blood match. The family had no idea Dexter suffered from hemophilia.
Samantha
said: “We have to be extra careful with Dexter now and he is walking in pain.”
Catalina Thiersen, vet at
YourVets24, said: “Very few animals under these conditions survive – he’s a
very lucky dog.”
The Echo,
http://www.echo-news.co.uk/news/11312996.Sick_Dexter___s_saved___by_his_hero_hound_brother_/

1 thought on “Dogs Get Hemophilia, Too”